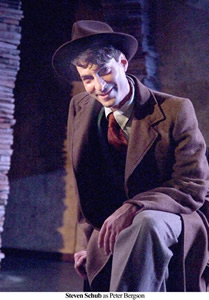 World War II has been called, “the good war.” We Americans view ourselves as liberating Europe, and as having been celebrated by dancing in the streets. There is much to be put on the positive side of our ledger. There are some pretty uncomfortable facts too, prominent among them is America’s official blindness to Hitler’s systematic annihilation of the Jews until late into the war. Before you get turned off on this theme – enough of the holocaust already – playwright Bernard Weinraub has some history that is disturbing, really interesting, and not well known.

A pet peeve of mine is historical fiction in which you cannot be sure what is fact and what is fiction. That is not an issue in former New York Times reporter Weinraub’s meticulously researched drama, The Accomplices, at the Fountain Theatre. Every character is a real person with the exception of a secretary in the State Department who represents underling government employees, aware of the slaughter of Jews by Hitler, and were becoming disenchanted at government inaction for refuges. You will go home with a head full of facts you might prefer not to have known.

1940, a brash young man named Hillel Kook (Steven Schub) came to America from British controlled Palestine as Peter Bergson, a name he thought would be more palatable to Americans. He was a bright, informed, argumentative, determined, and dedicated young man who came to organize American Jews and promote the overthrow of British control of Palestine. He quickly changed his focus to raising awareness of the concentration camps in Europe and trying to mobilize the US government to open the door for refugees. He was arrogant and preachy. Some have found the character of Bergson lecturing and too much in your face. I think that Weinraub’s point is that Bergson is the kind of person it took to get a nation to listen and a government to change. I would not have wanted Bergson at my dinner party (and he would not have wasted time on such a frivolous social event), but I have to admire his determination and his ultimate success. That he is a minor footnote in our history is amazing.

There was little charming or likeable about Bergson and Schub ably throws himself into his character, channeling my grandfather’s accent without missing a beat. Interestingly, there has been criticism of Schub’s accent, obviously by people whose grandparents came from some other part of Eastern Europe. Yes, there was little that was charming about Bergson yet much that was admirable. Schub does not sugar coat; I found myself cringing.

Assimilated American Jews, like the distinguished Rabbi Stephen Wise (Morlan Higgins) and FDR’s close friend and Secretary of the Treasury, Henry Morganthau (Dennis Gersten) cringed too. They did not want to be tarnished by association with Bergson. They were acutely aware of the anti-Semitism lurking in America. They had worked hard to assimilate, and behaved, to the point of obsequiousness, so as to not rock the boat. It is well known that Roosevelt himself turned a blind eye as he feared loosing the election if he were to make the genocide a cause célèbre. In the State Department there were repeated deliberate moves to delay issuing visas which caused refugees who were supposed to be granted US visas to be marched to their death instead. Roosevelt walked a tightrope between the old boy network and the knowledge that was becoming impossible to avoid. He was an astute politician and he was facing a tough election.

Through obnoxious persistence and showy tactics like organizing four hundred orthodox rabbis to march on the White House Bergson ultimately got to see them all. He got the attention of major Hollywood figures such as Ben Hecht (also Dennis Gersten) and Marlon Brando who publicly supported him. In his column Hecht wrote about Bergson and his cause. Hecht purchased full page ads in the New York Times promoting a rally to raise the consciousness of Americans. The rally was a reading by major Hollywood figures in Madison Square Garden, and other cities, that drew hundreds of thousands, causing Washington to take notice. In 1944, American policy finally changed. Two hundred thousand Jews were saved. Bergson considered that a defeat. It was a feeling he carried throughout the rest of his life which included marrying the beautiful blonde dancer, Betty (Kirsten Kollender), whom he met on his crusade, his subsequent return to Palestine to further his initial mission to defeat the British, then ultimately his return to America to be a commodities broker. He was clearly an exceptional person.