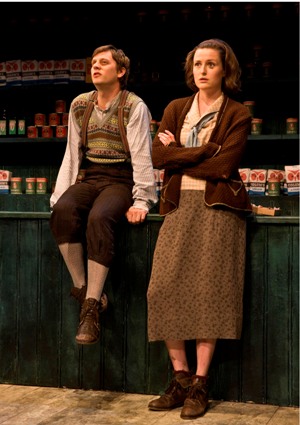 The Cripple of Inishmaan

Absent a window, how does one peer into the Irish soul? You open the door to the Irish cellar, feel the chill, dank air rising up from its depths and descend carefully down the rickety stairs of history. Be sure to carry a lighted candle—although its feeble flame can, at best, illuminate only a bit here, a bit there, of the Irish psyche. So many shadows, so many dark, hidden places…

Martin McDonagh has gone down into that cellar many times and his plays—”The Beauty Queen of Leenane,” “The Pillowman,” “The Lieutenant of Inishmore,” “A Skull in Connemara”—reflect what he’s found there: cruelty, kindness, loneliness, longing, deceit, thwarted hopes, courage, anger and despair, all often marbled with veins of dark humor.

He works on a 12-tone emotional scale and uses all in “The Cripple of Inishmaan.” The play, first performed in 1996 in London by the splendid Druid and Atlantic Theater Company, deals with 17-year-old Billy Claven in Inishmaan, one of the small Aran Islands about 30 miles off Ireland’s western coast, across from Galway. The time is the mid-1930s.

Cripple Billy—called that since he was an orphaned baby and, despite his frequent pleas to the people of Inishmaan to simply call him “Billy,” probably will always be Cripple Billy—has a clubbed left foot, drags his left leg, his left arm is weak and his lungs wheeze a bit. Still, he gets about, albeit slowly; Tadhg Murphy captures his shy, gentle and intelligent nature in a very moving way.

He lives with his two “aunties,” Kate and Eileen (Ingrid Craigie and Dearbhla Molloy) in a small grocery store that seems to stock only canned peas, eggs and a limited variety of candy, limited because Eileen never sets the good stuff out for customers but surreptitiously eats it herself. Although not really blood relatives to Billy, the two women, spinster sisters in their 60s, have raised him and loved him since infancy, his biological parents having drowned—somewhat mysteriously—shortly after his birth.

Their store is quite sparse—a counter, largely empty shelves, a small table and a chair—and yet it exerts a gravitational pull on the locals. In comes JohnnyPateenMike, a gossip of the type my late Irish grandmother used to call a blatherskite. The dictionary defines the term as “a wheedler, a soothing, undermining fellow who strives to steal into your confidence in order to come at some secrets and then betray them.” As JohnnyPateen, Dermot Crowley emphatically crosses both t’sand dots the single i in blatherskite.

He fancies himself as the news source for this sad little world of Inishmaan and expects to be paid either in foodstuffs (preferably eggs) or in kind, meaning some fresh gossip he can peddle elsewhere. On this particular day, JohnnyPateen has “three pieces of news” and becomes testy when Kate, Eileen and Billy fail to give him their rapt attention. His first two items are trivial, but the third is really significant: an American movie-maker is coming to the adjacent island of Inishmore to make a film entitled “The Man of Aran.”

After he leaves, Billy concedes that the prospective movie is indeed “an interesting bit of news.” When Kate reminds him that he’s usually not interested in Johnny’s gossip, he agrees but then adds: “when it’s about films and getting away from Inishmaan, I am.”

Indeed, news of the impending film spreads quickly through the town. The two teenaged McCormick siblings, Bartley and Slippy Helen, have heard about it and have arranged to be rowed to Inishmore the next morning by the fisherman BabbyBobby [where does McDonagh get these names?] in the hopes of winning parts in the film.

Bartley, played by Laurence Kinlan, is a simpleton fixated on telescopes and a particular kind of candy never in stock (because Eileen eats it). Clare Dunne’s Helen is a coil of razor wire in a skirt and is equally mean to everyone—her brother, the two “aunties,” the parish priest whom she splattered with an egg for pinching her “arse” during choir practice, JohnnyPateen and, especially, Billy. He suffers her lacerating taunts—his parents drowning was not accidental, she tells him, but suicidal once they saw their newborn babe was crippled—because he obviously cares for her.

Billy pleads with Bobby to be included in the curragh, or skiff, headed for Inishmore but is rebuffed. Not until the boy shows the older man a letter from Dr. McSharry, the village doctor who had examined Billy a day earlier, does Bobby relent. Be at the quay at 9 o’clock tomorrow, he tells Billy. Out of nowhere, JohnyPateen appears and demands to read the doctor’s report.

“Be showing it to JohnnyPateen that letter now, cripple-boy,” he says imperiously, his hand out.

“I won’t be showing you me letter,” Billy replies.

“What d’you mean you won’t be showing me your letter?” the blatherskite shouts. “You showed him [Bobby] your letter! Be handing it over, now!” But Billy won’t budge.

And so it happens that Bobby, Bartley, Helen and Billy row to Inishmore, but only the first three come back. The American film crew takes Billy with them back to California for a screen test, where he spends the next several months to no avail and his wheeze is now a wracking, ominous cough. Dr. McSharry obviously had found trouble in the young man’s lungs and that’s what his letter was about.

After thinking he could escape the miseries of Inishmaan in California, Billy realizes he can’t and so he returns to the island. There, a new round of bitter discoveries (involving the truth about his parents’ deaths) and dashed hope (after a surprising hint of affection from Helen) await him. The door to that cellar swings open once again.