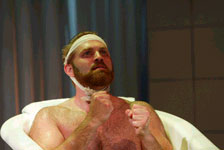 As the wider than usual curtain sweeps across the stage, the music of The Highest Yellow in minimalist repetition announces that something out of the ordinary is commencing. The musical repetition suggests inebriation, maybe an out-of-body experience, but clearly an elevation of energy, an energy associated with the fantastically colored canvases of Vincent van Gogh. However, the opening scene does not manifest in a golden landscape, but in a hospital in Arles where van Gogh has already cut off his ear.

The focus, though, isn’t on van Gogh, but on the young Dr. Felix Rey who attends to the painter. Rey is preoccupied. In the second song, &#147;Somewhere Paris,&#148; the doctor reveals that he wants to escape the night shifts in the charity ward of this provincial hospital and move to Paris to participate in a more sophisticated life. Everyone&#151;his criticizing superior Dr. Urpar, his childhood friend Dr. Barrault, the prostitute Rachel in love with van Gogh, and eventually van Gogh himself&#151;stands in the way of Dr. Rey&#146;s dream.

The Highest Yellow, commissioned by Signature Theatre and in the tradition of Stephen Sondheim, offers a lyrical through-line of songs with occasional dissonant shadings. The story is psychologically dark, but has eccentric moments of humor and effusive bursts of passion. Van Gogh sings the tunefully appealing song &#147;The Highest Yellow,&#148; in which he informs Dr. Rey about what makes him live. As the naked artist steps into a cold bromide bath, he informs the doctor he must work because painting is his life and, furthermore, he does not wish to be cured because he needs to feel the glory of his vision.

Under the guise of dark comedy, van Gogh confesses that his body is a carcass and his mind is rotted, but he still has his manhood. Although the composer has van Gogh hit some odd tortured notes in his conversation with Rey, the wounded artist, as portrayed by Marc Kudisch, enters the tub like Michelangelo&#146;s David suddenly coming to life to enjoy a bath. The fact that Kudisch dunks himself fully under the water and then sticks his feet out of the tub reinforces the idea that the artist is larger than life and immune to treatments set out for ordinary people. Unfortunately the opportunity to connect intimately with van Gogh is lost because Kudisch&#146;s portrayal does not offer vulnerability.

Van Gogh&#146;s prostitute, Rachel (Judy Kahn), is the character that delivers the artist&#146;s plight and passion. She says his heart is too large, which makes him vulnerable, but it is also clear that van Gogh has profoundly touched her and she loves him. Additionally Rachel tells Dr. Rey, "You need the dark to make the light lighter, shadow to make an image brighter, and the scream to make the quiet heard." Kuhn connects immediately with the audience. She delivers her words clearly, allowing the listener to let go of the outside world and preconceptions about van Gogh. Her songs, &#147;His Heart&#148; and &#147;To Make the Light, Lighter&#148; are late in the first act. To achieve a fully successful theater experience, the play needs to draw the audience into the transforming magic of the story earlier in the show.

Rachel&#146;s plea to help van Gogh ignites Rey, who has just been accosted by Dr. Urpar for never having cared enough about anyone to get his hands dirty. Ripe for Rachel&#146;s unexpected passion, though her passion is for van Gogh, Rey falls headlong into the abyss of love. Here is where the actual story of van Gogh&#146;s time in Arles becomes the artistic vision of Michael John LaChuisa and his collaborating partners librettist John Strand and artistic director Eric Schaeffer.

Schaeffer, who works here with limited space, adds some economic touches to this world premiere production. The ten-piece orchestra is seated on an eight-foot riser at the back of the stage. Schaeffer allows the audience to see the orchestra in degrees. At first it is hidden behind a curtain; once the curtain is parted, the musicians work in the dark, but at the end of the first act, they are lit in a bath of yellow that creates a handsome Mondrian striping effect.

Three of the seven actors in this production play multiple roles. Often the audience sees the actors switch to a different character by simply adding or changing headgear. This out-in-the-open role-changing, while clever, keeps the audience consciously aware the experience is theatrical and it inhibits surrender and connection to the characters and their lives.

Schaeffer best demonstrates his skill of blending transformative theater magic and acting as the second act opens. Before the audience gets back in their seats, Donna Migliaccio, as the Madame of Rachel&#146;s brothel, saunters both on stage and out in front of the curtain, which is halfway open. With her eyes penetrating the audience, the Madame invites those in the street to enter her brothel. Her song, which has a tango introduction (tango was invented in the brothels of Argentina around the time van Gogh was in Arles), is about disease and it is dark comic counterpoint to the opening scenes in Dr. Rey&#146;s hospital.

Despite the slow start in connecting the audience to the story of The Highest Yellow, the engaging music and poetry of the lyrics beg for repeat attendance.