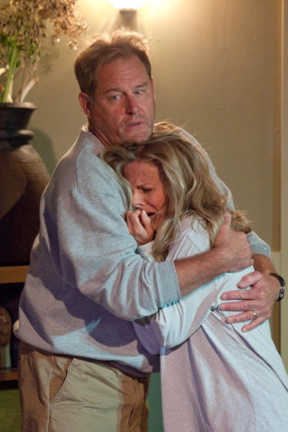 ‘The Tragedy of the Commons’

In the marketplace of flawed relationships, according to a psychologist friend of mine, we tend to buy what we already own and to sell what we don’t own.

Consider feelings of guilt. Don’t we all know someone with a bulging warehouse of guilt who can’t pass up the opportunity to buy one more? And still one more after that?

Or insecurity, masked as bravado. Don’t we all know someone who is constantly trying to sell us his/her importance? Just look at all those trophies on the mantelpiece and the framed awards on the wall—don’t these tell us we’re in the presence of a significant person?

This thought occurred to me as I watched Dakin Adams (played by Brian Kerwin), Dakin’s wife, Macy (Leslie Hicks), Spencer Adams, the apparition of their dead son (Lane Compton), Ellen Adams, their daughter and a successful lawyer (Austin Highsmith), Carl Brewer, the Adamses’ neighbor (Edward Edwards), and Dan Gerard, their new neighbor (Jeffery Stubblefield) struggle with one another in “Tragedy.”

Dakin is a whirlpool of regrets, remorse and despair into which the other five are unwillingly drawn. He has lost his job as a public school teacher; his son Spencer died in a World Trade Center building on 9/11; his self-respect and sense of worth have evaporated; and he’s in the process of losing his wife, daughter, and close friend (Macy, Ellen and Carl, respectively) all through his own doing. And yet here he is trying to buy more unhappiness from Dan—indeed, driving up the price he will eventually have to pay for that unhappiness.

So if that’s what he’s buying, what is he selling? An intangible, which he persuades himself is of incalculable value: a magnificent view of the Pacific Ocean from the family’s hillside home in San Diego, buttressed by environmental righteousness. This imaginary gilt-edged stock is poised to become wallpaper if new neighbor Dan proceeds with his plan to enlarge Carl’s house, which he has just bought, with lofty second and third stories. Unfortunately, Dakin cannot close his pitch—not to Macy, not to Ellen, not to Carl, and not to Dan.

Kerwin’s characterization of Dakin’s mounting frustration and anger—slumping into a chair and covering his face with his hands when he fails to win Macy’s support against their new neighbor’s plan, or raging at what he construes as former neighbor Carl’s treachery—is a superlatively calibrated and compelling performance. Given his professional chops, it’s possible he breathed life into Metcalfe’s clay all by himself.

But since some of the other cast members also turned in credible performances, attention must be paid and credit given to Florek’s direction. Hicks conveys Macy’s efforts to pull her husband back from the ledge with warm, affectionate concern. Highsmith’s Ellen is a believable daughter who tries time and again to help her father despite his long-standing neglect of her. Edwards is a well-meaning ex-neighbor who bears Dakin’s abusive rants up to a point.

Stubblefield’s Dan comes across as a bit too sharp-elbowed and unnecessarily confrontational new neighbor. Compton’s Spencer, the 9/11 victim, is a contrivance, more than a little snide, who appears on-stage only when Dakin is alone; he clearly is an excuse for Dakin to express internal thoughts. At that, the character is superfluous and would be no great loss if Metcalfe would allow Dakin to break the fourth wall and share his interior monologues with the audience.

One final thought: the play’s title refers to the late ecologist Garrett Hardin’s description of over-exploitation of a shared resource—like a field where several farmers concurrently graze their livestock. Eventually, each farmer’s self-interest will exhaust the field to the detriment of all. Try as I might, I could not find this as a metaphor for the drama.