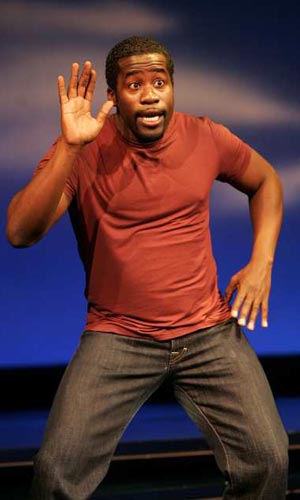 For me, “Through the Night” at the Geffen Playhouse, had two strikes against it before the lights dimmed:  I understood it would be politically correct (I bleed enough listening to NPR every day; I want something else at the theater), and it is a one-man show.  With few exceptions I am simply not a fan of one-person shows.  Having said that, “Through the Night” was surprisingly good.  Obie winning Daniel Beaty comes out of Yale Drama School and ACT.  It shows.

The action takes place on a single night.  Beaty plays six major characters, each of whom illustrates an experience of African-American males, in addition to a host of minor characters (mostly female).  Their stories crisscross on this action-laden evening.  Beaty is masterful in his portrayals be it the successful young gay man who can hardly admit his orientation to himself, let alone his father, the Bishop, who does not want to hear; to Dre the ex-con, ex-addict hanging on by his fingernails.  Eric, a precocious ten year old plays in his father’s herbal shop making bitter tea from the herbs on the bottom shelves — the ones that cannot poison you — and serving them to customers who willingly drink it to make him smile.  His father, Mr. Rogers (wink, wink) is trying to bring healthy living to the ‘hood.  The patrons may like little Eric, but it is a loosing battle economically.  It is high school graduation night for ‘Twon who is on his way to Morehead College.  ‘Twon was stuck in special-ed classes but his mother kept insisting to the school that he was not stupid until she finally was heard.  In fact, though the female parts are small they are generally a celebration of the strength of African-American women.

Beaty interjects song (some by Lindsay Jones) and humor adding greatly to the entertainment value.  His voice is excellent and he moves with grace.  The abstract set (by Alexander V. Nichols) allows projections that help with continuity from the hospital corridor, to the herbal shop, the projects, and the classy ad agency of the Bishop’s son.  The character’s stories are interesting and not all struggles relate solely to the African-American experience. “Through the Night” is most reminiscent of Anna Deavere Smith’s early work.  If you were a fan, you will love “Through the Night.”

Daniel Beaty is a very talented writer.  I, for one, would like to see a piece by him that is performed by more than one actor.  The acrobatics of character change — though incredibly skillful — have somewhat of a stunt like quality detracting from the stories.  Beatty is good.  He does not need a gimmick.  But then, I did warn you in the beginning, I am not a fan of solo dramatic performances.