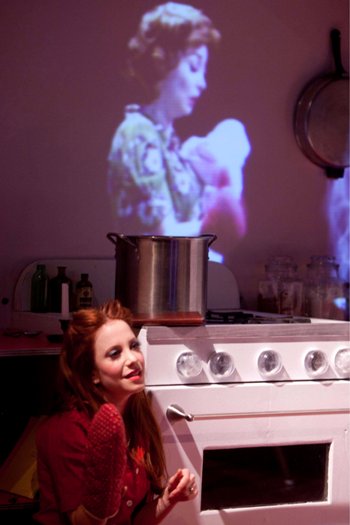 Wish I Had a Sylvia Plath

If Sylvia Plath hadn’t been driven to suicide by her husband’s philandering and her own fragile psyche cracking under the simultaneous burdens of a marriage gone bad, motherhood and artistic ambition, then this play might well have done her in.

The problems with “Wish I Had a Sylvia Plath” arise not from the solo performer (Amy Davidson), the director (Matthew McCray), the producers (Andrew Carlberg and John Perrin Flynn) or the supporting staff of the Rogue Machine Theatre, who brought this play to the bandbox Lounge Theatre in Los Angeles for its first West Coast run. Rather, it’s the play itself.

Written by “Edward Anthony,” a nom de plume for Elisabeth Gray, a North Carolinian who studied at Oxford, England, “Wish” takes the last 10 seconds of Plath’s existence and expands it to 80 minutes, through flashbacks, to significant events in her early life, revealing the woman’s mounting despair and rage.

As the play opens, the lighted set reveals a tidy kitchen—a fridge, a sink beneath a large window, a drop-down ironing board, a table with two chairs and a high-chair with a large Raggedy Ann–like doll.

Oh, yes: there’s also a built-in oven. Its door is open and there’s a fully-dressed woman lying on it, half-in, half-out. It’s Ms. Davidson, as still as a Madame Tussauds wax figure, and her character, Esther Greenwood (but we all know she’s really Plath, right?), is quite dead, a suicide.

So the play starts at the end of Plath’s life and comes forward, in non-linear sequences, to the present. A kitchen timer sounds and the woman in the oven is suddenly, startlingly alive. She springs out of the oven and, addressing the audience directly, cheerfully sets herself to mundane, house-wifey tasks.

Almost immediately there’s a chirp, an “eeek!”, and we discover that the oven, a sort of self-cleaning R2D2, can communicate with Esther. She calls the oven “Olsen” and translates the chirp/eeek exchanges for us. It’s meant to be a darkly humorous touch, along with other bits, but black humor is, to paraphrase Forrest Gump, as black humor does*.

Esther Greenwood (the name of the central character in Plath’s “The Bell Jar,” chosen by the playwright when she was unable to secure the rights to use Plath’s real name for the play) is the star of a televised cooking show called “Tome and Garden.” She’s also the wife of a poet almost as famous for his sexual maruading as he is for his sonnets, the mother of a young child and an aspiring poet in her own right.

But on this last day of her life, Esther’s at home making a “…52-liar lasagna, a black-tar brain soufflé and a perfect life…” all of which are oblique references to her husband Ned Pews’ (Plath’s real-life husband, Ted Hughes; see: denied usage rights, above) marital treachery and casual cruelty. As she fiercely chops a large zucchini for the lasagna, it’s supposed to elicit chuckles, recalling Lorena Bobbitt’s sous-chefing the penis of her abusive, passed-out husband almost 20 years ago, but it made any man in the audience over 40 squirm.

Davidson propels the story by recreating, episodically, pivotal events in Plath’s brief, unhappy life: her hyper-critical father and demanding mother; Ned and his current mistress; the doctor who administered her electro-shock therapy; and even herself as a little girl and as the host of the “Tome and Garden” show, all appearing as projected video clips on the kitchen wall, kitchen window and even the refrigerator door. Not only does she interact with these characters, voicing-over some, she’s also whirling around the set like a juggler keeping a dozen dinner plates spinning on sticks.

The end comes, almost mercifully, after a bitter row with Ned/Ted—he’s projected on the kitchen window—and he tells her “You’ll never write until you wake up.” But Esther/Sylvia is acutely awake as her husband’s image fades and she regards Olsen. “The oven giveth,” she says, “and the oven taketh away.”

*It didn’t work for this reviewer.