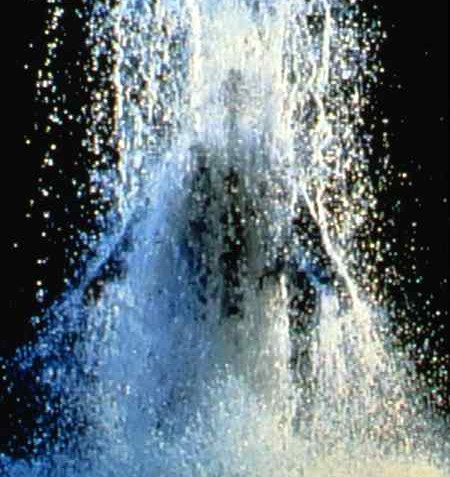 The San Francisco Museum of Modern Art is presenting an ambitious 25-year survey of the video art of Bill Viola. The retrospective exhibit includes fifteen of Viola&#146;s creations, providing a powerful experience that will be completely new to most viewers.

An entire floor of the museum has been subdivided into a series of meandering rooms in which the works are installed. The museum has avoided adding labels and narrative to the works, with the effect of encouraging active viewer response and interpretation. The last room does give background information about the exhibit, but instead of using traditional means, the curator presents a display of the artist&#146;s own notes and working drawings.

This approach is both refreshing and appropriate. Each of these unique works places you in a space where various video media are the primary sources of light. The large, dark spaces are part of the experience, focusing attention on the multimedia presentation while still allowing you to move freely around. If at first the works are jarring or even shocking, you almost immediately are drawn into the environment, becoming a part of it. The medium challenges you to pause, observe, and reflect. Some of the videos run for several hours, so each visitor will see a slightly different version of the presentation.

We think of art as existing in three dimensions, but video art uses the dimension of time as an integral part of the medium, adding the welcome challenge of the complexity of a fourth dimension. The visual and temporal variables of the videos are further punctuated with the aural. Sounds as disparate as the soft breathing of sleep and the loud clanging of machinery are juxtaposed, arresting your mind like a meditation bell. The sounds make you notice the images flickering across the screens and monitors, images in slow motion, trapped in boxes or projected larger than life. Ordinary images seem more profound, and, of course, some of the images themselves are extraordinary.

In a work from 1992, Heaven and Earth, two black and white video tubes face each other, mounted at the ends of wooden columns. On the upper monitor is a video of the artist&#146;s mother on her deathbed. On the lower monitor is a video of his infant son, only a few days old. The videos reflect into each other, a meditation on birth and death and the connections between generations.

Another compelling work, Passage, dates from 1987. A long narrow corridor leads to a small room where a large video projection fills the entire wall. The videotape is of a child&#146;s birthday party played in slow motion. The smallness of the room forces you uncomfortably close to the image as you hear the slowed rumbling of the children&#146;s voices. The exaggerated proportions and slow motion give this room a fascinating, surreal quality.

The spirituality of Bill Viola&#146;s work draws inspiration from Christian mysticism, Zen Buddhism, Balinese and Javanese music, Sufi poetry and many other sources. He uses everyday images and, by drawing attention to the ordinary, and to neutral states of mind such as sleep or stillness, he opens inner doors to our own psyches. Using the familiar and modern medium of video he creates an intimate and moving experience.