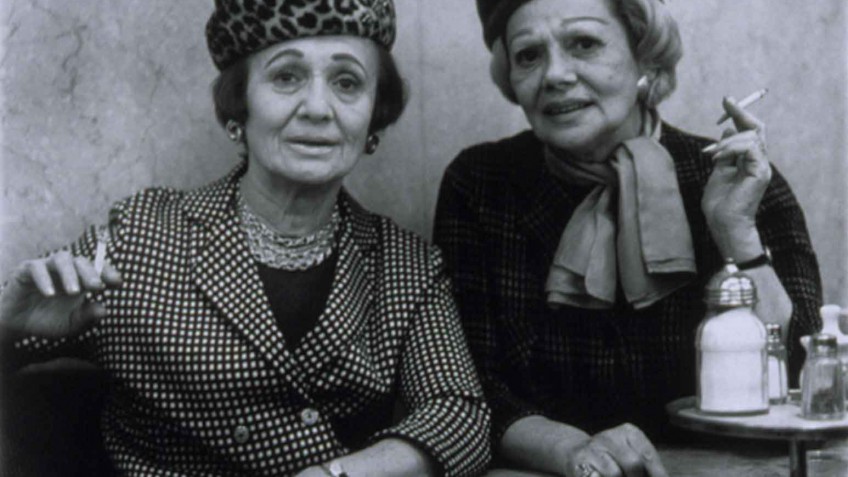 Much has been made over Diane Arbus’ choice of subject matter for her photographs. Tattooed men, dwarfs, giants, transvestites, nudists, strippers, asylum inmates–"freaks" by choice or chance of birth, people at the margins of human experience. But as this wide-ranging new retrospective of Arbus’ work, encompassing some 200 photographs (and a substantial collection of archival materials), shows, she also photographed a lot of ordinary people in mid-20th century New York and to today’s eye, many of them look strange, freakish.

People at the margins have always been of interest to artists; Bosch and Brughel depicted madness, Hogarth etched asylums, Velazquez painted dwarves and Goya, cannibalism–there are countless examples. For viewers, there is more than morbid curiosity in play; there is, certainly, a "there but for the sake of God go I" element involved. The latter response, though, depends upon a clear identification with the subject, relating to the subject as another human being.

That is where an artist of Arbus’ caliber differs from a mere documentarian; she finds and expresses in her photographs the humanity of her subjects, their vulnerabilities, their sadness. (Joy only rarely manifests itself in her work; when it does (A Jewish Couple Dancing, 1963), it is surprising, momentarily refreshing, but ultimately a brief diversion from a darker vision.)

The quality of freakishness is surely a relative and changing one. Some of Arbus’ subjects are less exotic to American culture now than they were fifty years ago–the transvestites (now with legal protections in some places), the muscle men (now elected to high public office), the tattooed (seen everywhere todayand exhibited as folk art). The quality of the photographs is in no way compromised, though, by the changes in social mores. What has changed is the ability to see these pictures today, not as exploitation of their subjects (of which Arbus was accused in the past), but as exploration of the emotional effect of being marginalized.

If the "freaks" achieved the greatest notoriety, the pictures of more ordinary people seem to have gained in resonance over the years. There are a number of portraits of middle and upper class women dressed in the style of their day; these pictures today, in a changed world, have gained a freakishness of their own. The Two Ladies at the Automat, the Woman with a Veil, A Widow in Her Bedroom, the Two Ladies Walking in Central Park–all are dressed to the nines with proper hats, gloves, pearls, and purses, eyebrows tweezed and cigarettes aglow. They were the ultimate in propriety in their time; now they look overdone and all their efforts at dress and appearance do not conceal their tired, worn looking faces.

The younger generation reflected the styles of the old–The Junior Interstate Ballroom Dance Champions (1963), are not only dressed formally, but they display a certain attitude, a pretension to the pretension of their elders, the senior champs. Their counterparts, The King and Queen of a Senior Citizens Dance (1970), should be celebrating their coronation; instead, these ordinary folks look stiff and uncomfortable in gaudy simulations of the raiment of royalty.

Arbus was interested in these facades, assumed by people of all sorts to present themselves to the world, in their underlying identities, and in the differences between the two. And then she photographed any number of nudists, people who abandon all tangible forms of physical concealment–young (A Young Girl at a Nudist Camp, A Husband and Wife in the Woods) and not so young (Husband and Wife with Shoes On, Retired Man and His Wife at Home in a Nudist Colony). These people are among the most relaxed and seemingly content of Arbus’ subjects. Can they relax because they have discarded their clothing/facades? Or have they discarded their clothing/facades because they are already comfortable in their own skins? Arbus’ pictures of babies and young children and those of mentally challenged asylum inmates, too, evidence less pretense by the subjects, a more direct engagement between them and those around them.

While Arbus occasionally photographed landscapes and interiors, she is unquestionably at her most powerful in the portraits, portraits which go beyond the trappings and into the very souls of her subjects. It is that insight, that peeling down to the universally shared fears, insecurities, and existential aloneness that emerges from her work and remains, hauntingly, in memory. Arbus knew about that from the inside out. She took her own life in 1971.