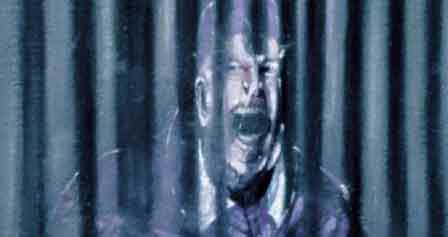 John Edwards, Francis Bacon’s close friend for sixteen years until Bacon’s death in 1992, has donated the contents of Bacon’s London studio to the Hugh Lane Municipal Gallery of Modern Art in Dublin. The acquisition of this treasure trove of Bacon’s source materials – books, photographs, letters, as well as brushes, paint pots and other tools of the painter’s trade – is a coup for the gallery which intends to reconstruct the studio as a permanent exhibit. While the curators are busy cataloguing the collection, the gallery is celebrating with a major retrospective of Bacon’s work.

There is some overlap between the works included in this exhibit and the 1999 Bacon retrospective that toured U.S. museums last year, but there are also other works here, including a number that have never been exhibited in a public institution before. An example is the early (1950) Study After Vel�zquez, one of a series Bacon painted based on the great portrait of Pope Innocent X. Elements that will reappear frequently in later works are already evident here – vertical striations, an open-mouthed scream and its concomitant evocation of erupting anguish, a curved element and white geometric lines defining tightly controlled space. It is a central Bacon theme – the tension created between out-of-control emotion and its presentation in totally and quite perfectly controlled composition.

Other works in the Dublin exhibit add further emphasis to the myriad influences on Bacon’s painting. There are Van Gogh-inspired landscapes (interesting, but not the best of Bacon), connections to other painters – Picasso, Courbet – as well as to photography, in particular the work of Eadweard Muybridge, whose books are among Bacon’s possessions. The untitled 1950painting of a crouching nude on a railis traced to a Muybridge photograph, while After Muybridge, a stunning work from 1965, creates a one ring circus with two grotesque figures in motion on a circular structure against a background of suede-like textured swaths of bright orange, violet, and rust.

Bacon has occasional peaceful respites: the Sketch for a Portrait of Lisa (1955) has little distortion and portrays its subject in a pensive and sad, but neither anguished nor even intense moment. Study of the Human Body (1987) is an example of Bacon’s homoerotic fascination with the male body, but even the blood stains in the composition do not inject the more usual Bacon charge – this is a cooler work, the figure once removed, almost as if seen in a mirror, clinical, unemotional.

It is when he veers into the grotesque and unleashes his demons that Bacon’s work soars: the 1988 Second Version of Triptych, 1944 with its disturbing figures that seem half human, half exotic bird, wholly unrecognizable, placed in a richness of wine and pink color, for example. Or, the towering masterpiece of this exhibit, the 1973 triptych in which Bacon confronts the death of his lover George Dyer, the nude figure repeated in the three panels, on the toilet, doubled over in anguish in one; a dark shadow spilling out of the contained doorway in another – suggested as shadow by the light bulb above, but equally suggesting some effluence of suffering. It was a drugged, sodden ending to a life shared at the edge – and it draws from Bacon one of his most disciplined, contained works – as if the greater the emotion, the greater the pain, the greater the anguish, then the greater the art that responds.