Those who remember the V&A’s 2007 exhibition “The Golden Age of Couture” will find this latest kicks off in the same place, chronologically (and, sadly, in the same inadequate exhibition space as well) — just geographically, a little farther south. Whereas “The Golden Age of Couture” covered London and Paris, this new show celebrates 50 years of Italian style, from its beginnings right after World War II to the latest designs from fashion houses such as Dolce & Gabbana, Gianfranco Ferre, and Versace.

But let’s face it, the Italians have always had style. Italian fashions have been watched jealously from over the Alps from the days of Henry VIII of England and François I of France. No doubt the two jaunty little ensembles with which the show begins were eyed up by some cunning Parisian couturier as soon as they were out of their tissue paper. One is a sun-warmed rose-pink, the other a natty blue and white — neither could have come from anywhere other than Italy.

Italian fashions do not sit all of a piece, like a Chanel suit, nor rely on the understated qualities of cut and tailoring, like English couture of the time. The most successful and delectable outfits here — as wearable today as when they were first created — act as a blank canvas for the wearer to finish off, or as a perfectly shaped frame for the woman lucky enough to pull them from her wardrobe. Round the corner from the pair of suits is a display of evening wear from the 1950s and ’60s. En masse, in their silent elegance, they could be a film-still from Visconti’s “The Leopard.”

There is something about Italian fashion that looks backward as much as forward. The same shapes and forms occur over and over again (the designs of Alexander McQueen do the same). Those cones and triangles from the 1960s are there again in the 2010s. You do start to wonder, as you walk around the show, how much the “Mad Men” aesthetic should actually be known as “Uomini pazzi.” The Italian designers, from Giorgini and his post-war design-fest, the “Sala Bianca,” onwards, got their costumes across the Atlantic with commendable speed. The wardrobes of many an American matron grace this show — and goodness, how our figures have changed. 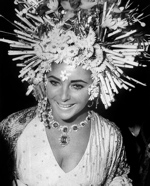 But then the Italian bella donna has always been proud of her curves. The waif-like Audrey Hepburn style is roundly trounced by the voluptuous glamour of Sophia Loren and her sisters — or of Elizabeth Taylor, an honorary signorina if ever there was one, whose amazing triptych of Bulgari diamonds and emeralds is also on display. Italian accessories are as much a part of Italian couture as the clothes, of course, and are equally celebrated in this show. No Italian woman would be found wearing the same label head-to-foot. The Ferragamo shoes, the Gucci leather-goods, are an essential part of the whole.

Of course, there are misfires. Coming up to the present day are the leopard-skin, Jackie-Collins disco horrors of Donatella Versace &dash; moda puttanesca, perhaps. And there’s a scarlet tulle confection from Valentino, from the 1970s (the decade style forgot). It has big ruffles. It has a tiered “young Victoria” crinoline. It has drawstrings. It has quilting. Put even Sophia Loren in that thing and she’d look like a frump. It’s ironic that even as this was coming down the catwalk, the Italian fashion industry was creating the new role of the stilista, that mysterious voice which decrees that one season we will all wear mustard-yellow, and the next that it’s, well, ruffles and quilting.

Another voice in that process has always been Italy’s textile industry. The role of the textile manufacturers and designers — their tweeds, the Pucci swirls, Missoni knits, painted silks, Maxmara cashmeres — is explored much more thoroughly here than in the 2007 show, and it’s all the better and more interesting a story for it. What hasn’t changed from that show is the V&A’s problem with its exhibition rooms. The British Museum has just opened a hall big enough for a 37-meter Viking longship. Where, in all the V&A’s patrons, is the one who will create with them an exhibition space that doesn’t have a service corridor chopping it in two?

But cross that corridor, and you find the show’s bravura catwalk finale. The V&A likes catwalks in its fashion shows; this section has the same elegance, the same style as that first display of evening-wear. It’s as if they’ve been left out to play. One dress here, by Dolce & Gabbana, a 1920s-style shift, straight up and down, uses sequins to recreate on fluid silk the imposing beauty of a thousand-year-old Sicilian Byzantine mosaic. Those Italians, eh? They’ve had it for centuries.