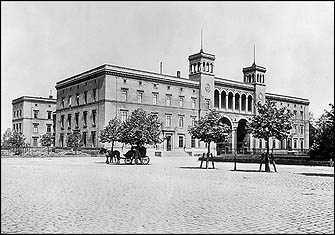 Standing near the site where an enormous new railroad station is being constructed in the heart of Berlin, the Hamburger Bahnhof is a station from the 19th century which has been gloriously preserved and converted into the Museum fur Gegenwart, a name rarely heard – it is still popularly called the Hamburger Bahnhof. The museum is one of the three venues of the state museum for the exhibition of modern art; here the focus is on contemporary work.

The restoration and renovation of the building has been accomplished with unusual sensitivity by architect Josef Paul Kleihues. The exterior, as can be seen in the photos, left, retains its original 19th century neoclassical appearance, with the addition of lighting installations by American artist Dan Flavin which highlight the architectural elements of the building, bringing a touch of 20th century edginess without marring – on the contrary, enhancing – its 19th century beauty.

The conjoining of old and the new continues inside the building where the main hall retains its original series of arches topping steel beams. Clerestory windows fill the room with light as do skylights and a rear wall entirely of glass. It is a cathedral of the industrial age of the 19th century. The walls are now in plain, pristine white, at once offsetting the elegant 19th century lines and creating a neutral background for the exhibition of the collections. A second major space on the right, the East Gallery, runs parallel to the main hall, with a vaulted ceiling and the warmth of parquet flooring. Each of these spaces can be divided with interior rooms for more intimate exhibition space. Smaller side rooms and additional rooms on the second floor provide still further spaces for exhibitions.

The museum’s collections, which cover roughly the second half of the 20th century include significant works by Andy Warhol, Cy Twombly, Robert Rauschenberg, Roy Lichtenstein, Anselm Kiefer and Joseph Beuys. At a recent visit, the standing collections deferred to a major exhibition spread through all three state venues for modern art in Berlin, an exhibition on the subject of 20th century German art and the foreign influences which helped to shape it. The first grand work to be observed in the main hall, a sculptural reconstruction of Oscar Schlemmer’s pre-World War I plan for a Triadic Ballet, captures and charms with its cubistically constructed cones, spheres, and spirals in bright, primary colors. The group of figures is displayed on a graded platform; together they make a large installation, beautifully proportioned for this grand space.

Behind the Schlemmer looms an enormous cube shaped structure of ceiling height, tilted on edge, the raised sides allowing openings for viewers to enter, housing a video installation – still another example of creative use of the large space within the hall for displaying another important medium of contemporary art. In the vaulted East gallery Jean Tinguely’s 1978 work, Meta-Harmonie, continues to fascinate viewers, while another work from the same year, Imi Knoebel’s large untitled collage of variously shaped painted wooden panels, splashes colorfully along the far wall. A masterful Fernand Leger from the post-World War II period is nearby, bragging of its influence on the constructivist works that followed it.

From the side rooms on either side of the building there are arcade-like spaces leading to the newer wings that embrace the beautifully landscaped forecourt. The arcades retain original leaded glass windows now embellished by additional lighting installations in green neon by Dan Flavin.

The Hamburger Bahnhof, a welcome venue for art lovers and already highly popular with Berliners, is an example of intelligent recycling of a valuable old building for new purposes, both respecting and highlighting the best of the old while adapting for current needs. It will inevitably be compared to Gae Aulenti’s redesign of the interior of the Musee d’Orsay in Paris, which, to one viewer’s eye at least, seems heavy-handed and intrusive in comparison to the sensitivity of Kleihues’ work here.