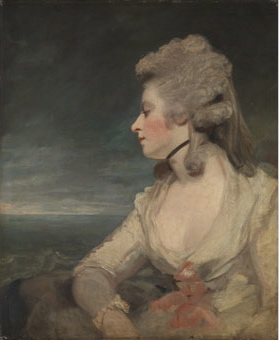 In Britain Sir Joshua Reynolds is regarded as something of a national treasure. The first president of the Royal Academy of Arts, his statue greets you on arriving at the art school and gallery he founded. In his day, he was considered the greatest painter of the time, more in demand than Turner, more celebrated than Constable. Yet today he is largely overlooked, and visitors to galleries and exhibitions are less likely to recognize works by him than those of his contemporaries.

A new exhibition at London’s Wallace Collection seeks to right these wrongs and to present Reynolds as an innovator whose experiments in paint, materials and technique led him to create some of the most daring and important paintings of the time. The exhibition is the result of four years of research into the gallery’s outstanding collection of twelve of Reynolds’ paintings. With support from various trusts and private donors, and drawing on the expertise of the National Gallery, London and the Yale Center for British Art in New Haven, the exhibition spans most of Reynolds’ career and includes portraits, “fancy” pictures and history painting.

Small in scale — it occupies just two rooms in the basement of the Wallace Collection — but rich in detail, the exhibition sprang from research that enabled conservators and art historians to examine the condition of the paintings now and look into their previous conservation. The project reveals Reynolds’ techniques, his studies and preparation, his working habits. X-rays and infrared reflectography of the paintings show ghostly images beneath the surface, sketches he painted over because he was dissatisfied with the position of a sitter’s arm (as in the portrait of Mrs. Mary Robinson) or the arrangement of a hairstyle or draperies. He recycled his canvases, presumably for largely pragmatic purposes since materials such as canvas and stretchers were expensive. Literally peeling back the layers of Reynolds’ paintings, through the use of high-tech analysis, discoveries were made into Reynolds’ compositional and narrative experimentation, and his unorthodox choice of materials, mixtures of paint, mastic, resin and wax, and complex layering techniques. Yet as president of the Royal Academy and a leading teacher, he was encouraging his students to learn from the Old Masters and to stick with tried and tested techniques.

The portrait of the Fourth Duke of Queensberry tells us something about how “society” paintings such as this might be finished. Once the portrait elements were complete, the painting might be sent out of the studio to any number of “draperies painters” who would finish off the clothing of the sitter according to the preferred style of the time, a generic rather than individual portrayal of the sitter’s costume. Investigation into this painting has revealed that the spots on the Duke’s ermine were over-painted in a richer, charcoal-based paint. The pallor of the Duke’s face also tells us something about the materials Reynolds was using: dissatisfied with the ruddy faces in most English portraits, Reynolds used a red lake pigment to achieve a more subtle flesh tone. Unfortunately, this pigment fades, and so today a ghostly face of the Duke stares out of the picture.

The exhibition includes four “fancy” pictures, including the creepy “Strawberry Girl.” Fancy pictures tended to portray fantasy subjects, usually children, drawn from the artist’s imagination. Examination of “The Strawberry Girl,” the picture of a strawberry seller who would roam the pleasure gardens of London, shows thick layers of paint and golden tones, redolent of Rembrandt, an artist whom Reynolds much admired. Next door to this painting, “The Age of Innocence” reveals another strawberry girl beneath it, a pentimento of an earlier work that Reynolds then painted over.

The exhibition offers a fascinating insight into the hidden stories behind the paintings, using archive resources, and X-ray images, and reveals the diversity, originality and imagination of Reynolds’ artistic approach, presenting this neglected artist in a new and exciting light.

This is a free exhibition, and as such visitors should take the opportunity to peruse the rest of the Wallace Collection (also free entry) and its world-famous collection of fine and decorative arts from the 15th to the 19th centuries with large holdings of French 18th-century paintings, furniture, arms and armor, porcelain and Old Master paintings arranged over 25 galleries.