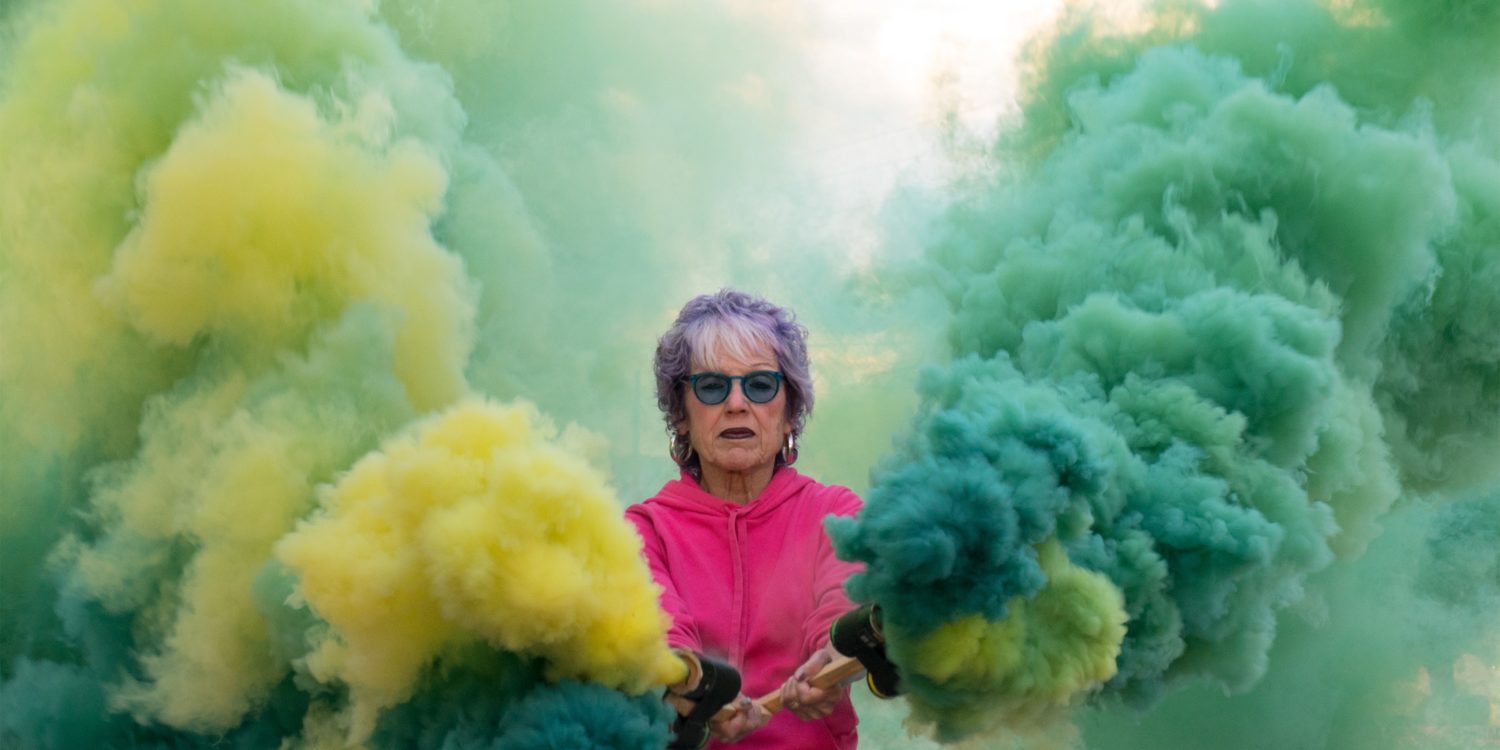 Driving the World to Destruction. 1985.

Excitement filled the crowded press conference at San Francisco’s de Young Museum last week as the pioneering iconic artist Judy Chicago stood at the podium. She recalled that her feminist installation masterpiece, “The Dinner Party,” was first shown at San Francisco’s Museum of Modern Art 42 years ago. With a hint of a sob, Chicago (b. 1939) referred to her art career as “a long hard struggle” because of “marginalization by the art world” that began with “The Dinner Party.”

Now permanently installed at New York’s Brooklyn Museum, “The Dinner Party” is a triangular table with a table runner embroidered with the names of 39 famous women of history, accompanied by images or symbols relating to their accomplishments. The place settings include napkins, utensils, a goblet, and a plate. Many of the plates feature a butterfly or flower-like sculpture representing a vulva. The establishment art world bombarded Judy Chicago with condemnation and criticism for “The Dinner Party.”

Chicago explained that “gender definitely contributed” to the attacks on her work, but a crucial factor was her unique “vision of what art can see and do.” For her, art is a vehicle for activism and social justice rather than pure artistic expression. Also, she has used traditional female “domestic arts” such as weaving, embroidery, needlepoint, sewing, and china-painting rather than solely relying on the commonly culturally valued male-dominated fine arts.

“The Dinner Party” is represented in “Judy Chicago: A Retrospective” with preparatory studies, test plates, and drawings. The film “Right Out of History: The Making of Judy Chicago’s Dinner Party” provides visitors a glimpse into the process of making this landmark work. The controversy around “The Dinner Party,” which traveled to sixteen world cities (thanks only to volunteer efforts), has regrettably eclipsed the rich body of artwork Chicago created before and since.

Now, the de Young Museum is celebrating this talented artist, author, and educator with the first and long overdue survey of her life’s creative achievement. The show includes approximately 130 paintings, prints, drawings, and ceramic sculptures, in addition to sketchbooks, journals, several films, and a documentary. “Judy Chicago: A Retrospective” enables viewers to examine Chicago’s oeuvre and appreciate her artistic and intellectual talents, which are far broader than what is indicated by her early efforts. Perhaps, for this reason, the show begins with her most recent projects and ends with her earliest work.

Her latest cycle, “The End: A Meditation on Death and Extinction” (2015–2019), is a hard-hitting view of mortality and humanity’s impact on nature. The poignant series “How will I Die?”, which focuses on the actual dying process, was executed using multi-fired paint on glass. Chicago’s intellectual curiosity is evident in this series. “How Will I Die #7, Will I Die Embracing the Light?” represents the sympathetic and graceful death we all wish for ourselves.

“The Birth Project” (1980–85) is Chicago’s effort to memorialize birth imagery and the actual act of giving birth as a fundamental feminine, and therefore, human, occurrence. Chicago notably said: “If men could give birth, there would be millions of representations of the crowning.” For “The Birth Project,” Chicago, with female volunteers, created more than 80 pieces, including “Birth Trinity: Needlepoint 1,” a particularly elegant swirling tapestry.

Chicago examines men’s dominance and hunger for power in her project “Power Play” (1982–87). “Driving the World to Destruction” (1985) is a potent work in which a sinewed muscled man drives a vehicle headlong into the flames.

“The Holocaust Project: From Darkness into Light” (1985–1993) grew out of Chicago’s eight-year investigation into her Jewish roots and heritage, yet developed into an examination of worldwide genocides. Aided by her husband, photographer Donald Woodman, and a group of artisans, the series is impressive and haunting. “The Fall,” an 18-foot-wide Aubusson tapestry, and “Rainbow Shabbat,” a monumental stained-glass window installation, each utilizes media that especially suits its subject matter and message.

The earliest works from her participation in California’s Light and Space Movement in the 1960s and early 1970s are interesting if only to illustrate how much Chicago has grown as an artist.

Chicago was born with the name Judith Cohen and her last name became Gerowitz when she married. But after not finding a place for herself in the patriarchal structure of the 1970s Los Angeles art world, she placed an announcement in Artforum’s October 1970 issue, stating, “Judy Gerowitz hereby divests herself of all names imposed upon her through male social dominance and chooses her own name, Judy Chicago.”

Forty-two years after the first exhibition of “The Dinner Party,” Judy Chicago: A Retrospective” salutes and celebrates a creative artist who has struggled against society’s expectations and remained faithful to her ideas and talent.

The appointment of Furio Rinaldi as the new Curator of Drawings and Prints of the two Fine Arts Museums of...
Art & Architecture