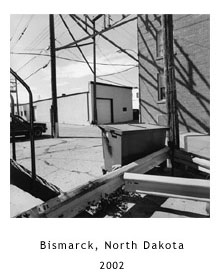 Lee Friedlander (b. 1934) has been photographing for nearly sixty years. A 1967 exhibition of his work, along with that of Diane Arbus and Gary Winograd, at New York’s Museum of Modern Art, propelled him into the front ranks of American photographers. He has worked in series over the years, but whether photographing people, landscapes, cityscapes, or nature, his focus has been on American subject matter and his artistry one of subtle wit, keen observation, and disciplined understatement.

Friedlander’s most recent series, Sticks and Stones, photographed over a twelve year period, consists of cityscapes observed not for their glamour or urban buzz, but with an emphasis on the mundane. A selection of thirty-four (from the collection of 192) of these black and white photographs, printed in uniform squares of about about fifteen inches, make up the current exhibition at Fraenkel Gallery.

The photographs are completely devoid of images of people, though the presence of people is palpable in the way the the images cumulatively define what people have created as their urban and suburban visual environments. Some of the photographs were taken from the inside of a car, suggesting the perhaps dominant viewpoint from which Americans observe their surroundings. "Las Vegas," for example, shows the massed highrises of fantasy-fulfillment hotels through the driver’s window, but also slyly exposes the more ordinary, lowrise buildings caught in the side-view mirror. "Great Falls, Montana" shows a clean-lined modern, brick factory with aluminum framed-windows of reflective glass. The effect is to make the interior of the building a complete mystery, at the same time contrasting it with the older buildings across the street, seen reflected in the glass.

Indeed, contrast is the principal subtext of these works. "Arkansas" has a flatbed truck moving a mobile home down the street of a town. In the rear there’s the modest neoclassical facade of a small commercial building; in the foreground, an elaborate street clock rests on an Ionic pedestal. Together the images speak to the modesty of small town life as well as its striving for something grander. "San Diego" shows nondescript buildings and some dumpsters arrayed in a parking lot, but at the curb is a small garden of flowers protected by a low picket-type fence. One of the "New York City" photos looks through a rooftop opening in an older building, ornamented with sophisticated brickwork and a large architectural urn on a pedestal; the building seen in the distance is a colorless commercial curtain-wall high rise.

Sometimes Friedlander foregoes the thematic, simply finding compositional interest in the accidental juxtaposition of diverse elements, as in "Bismarck, North Dakota" or "Tarrytown," the latter contrasting the textures of brick in the foreground building with the frame structure across the street, the street itself on a sloping hill that provides a strong angular element, and the shadows of electrical wires thrown on the frame facade adding further complexities with their linear tracery.