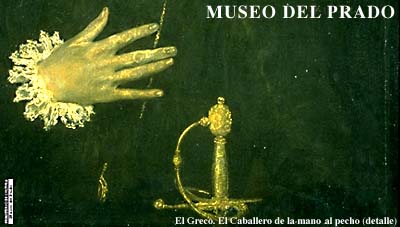 an outstanding catalogue of the painting

collection, published by the museum

Mythology & History in the

Great Paintings of the Prado

The main building that houses the Museo Nacional del Prado, one of the world’s great repositories ofart, traces its roots back to the reign of Charles III in the second half of the 18th century. Called "the bricklayer" for his extensive programs of urban development,Charles’ original plans were for the building to be a Natural Science Museum — the eighteenth century, "the age of reason," held the sciences in the highest esteem. The king’s architect, Juan de Villanueva, planned a grand neo-classical building, but, due to war, completion was delayed and the building’s initial use was as a cavalry barracks for Napoleon’s troops.

It was Ferdinand VII, Charles’ grandson, under the influence of his wife, Queen Mar�a Isabel, who decided to create a museum to hold the royal art collections. He chose the Villanueva building and had its construction completed according to the architect’s plans. The building opened in 1819. The museum was never large enough to exhibit its extensive collections. Over the years other buildings were added to the Villanueva building, but even today there is not sufficient space to show even ten percent of the Prado’s holdings.

For the art lover, institutions on the scale of the Prado (or the Louvre or the Metropolitan Museum of Art) are at once a joy and a frustrating challenge: joy in the opportunity for the eye and mind to feast on the great art works of the ages, frustration in being able to spend time with only a small fraction of the small fraction on exhibit at any given time.The Prado’s collections contain thousands of drawings and prints, decorative arts, more than 700 sculptures, and an astounding 8,600 paintings.

Vel�zquez’ great masterwork, "Las Meninas," a life-sized group portrait, is centered on the Infanta, with her ladies-in-waiting, other court functionaries, and even the king and queen shown observing the entire scene, reflected in a mirror. But the artist himself is equally significant in this canvas, and for all its technical wizardry and royal subjects, it is as much about Vel�zquez himself, his role as an artist, and his relationship to his patrons. He wears the insignia of the noble rank to which he aspired for years, but which, at the time of the painting, he had not yet been granted by the king. Accounts differ as to what happened. Did he do this at the time of the original painting as an unvarnished appeal to the king for the status he sought? Or was it added later, after actually won, to record for the ages the status of painter as nobleman?

No visitor misses "Las Meninas," but every bit as interesting, if not as perfectly executed, is the later work, "The Spinners," a complex juxtaposition of moments in the story of Athena/Minerva (goddess of wisdom and handicraft) andArachne, who competed over weaving abilities. The factory-girl spinners of tapestries are portrayed in the foreground with the elegant mythical figures staged in the background. There is no sign of the outcome – Minerva turning Arachne into a spider.

Vel�zquez was not a prolific painter; only 120 works are known today. Half of those works are in the Prado. El Greco, whose mannerist style and religious ecstasies capture the modern public imagination and make him a favorite with many, created even fewer paintings, only seventy all told. Of those 90% are in the Prado.

On the other hand, Goya, the "first of the moderns," was a prolific painter and the collection of his works at the Prado is the largest of any single artist represented. The sheer volume of work on view is mind-boggling; that so much of it is of such greatness that it speaks so vividly to viewers two centuries later can only generate wonderment. Goya recorded his times, from the "cartoons" (studies for the Royal tapestry factory) which depict aspects of day-to-day life (an "allegory of commerce" for example), paintings of a commedia dell’arte troupe, or another of a china vendor and his aristocratic customer, to the royal portraits, to the varied series of etchings such as "The Disasters of War." He saw with clarity and a sympathetic, humanistic viewpoint which remains enormously appealing today. Much attention is focused on the sensuous, reclining, "Naked Maja," speculated to be The Duchess of Alba, with whom Goya had a torrid affair. It was surely a daringly overt image at a time when the Inquisition was not fully wound down. But Goya’s series of portraits of the royal family, including grand Queen Maria Louisa, the real power behind her weak husband, Carlos IV, have more psychological depth and interest than the pasted on face of the Maja and the late "black" paintings exhibit imagination and extension of the means of expression that seem more profound than merely challenging the taboo on sexuality.

Although efforts at restoration continue, the Prado seems to remain behind its peers in the overall condition of its collections. So many paintings seem to be in desperate need of cleaning and all too many exhibit cracks and other damage. Seeing a recently cleaned painting hanging beside one dimmed by the grime of the centuries emphasizes how much is lost and how much remains to be done. Of course, the painstaking process is very expensive, but the prosperity of Spain should allow an acceleration of efforts to save the priceless glories of the state collections.