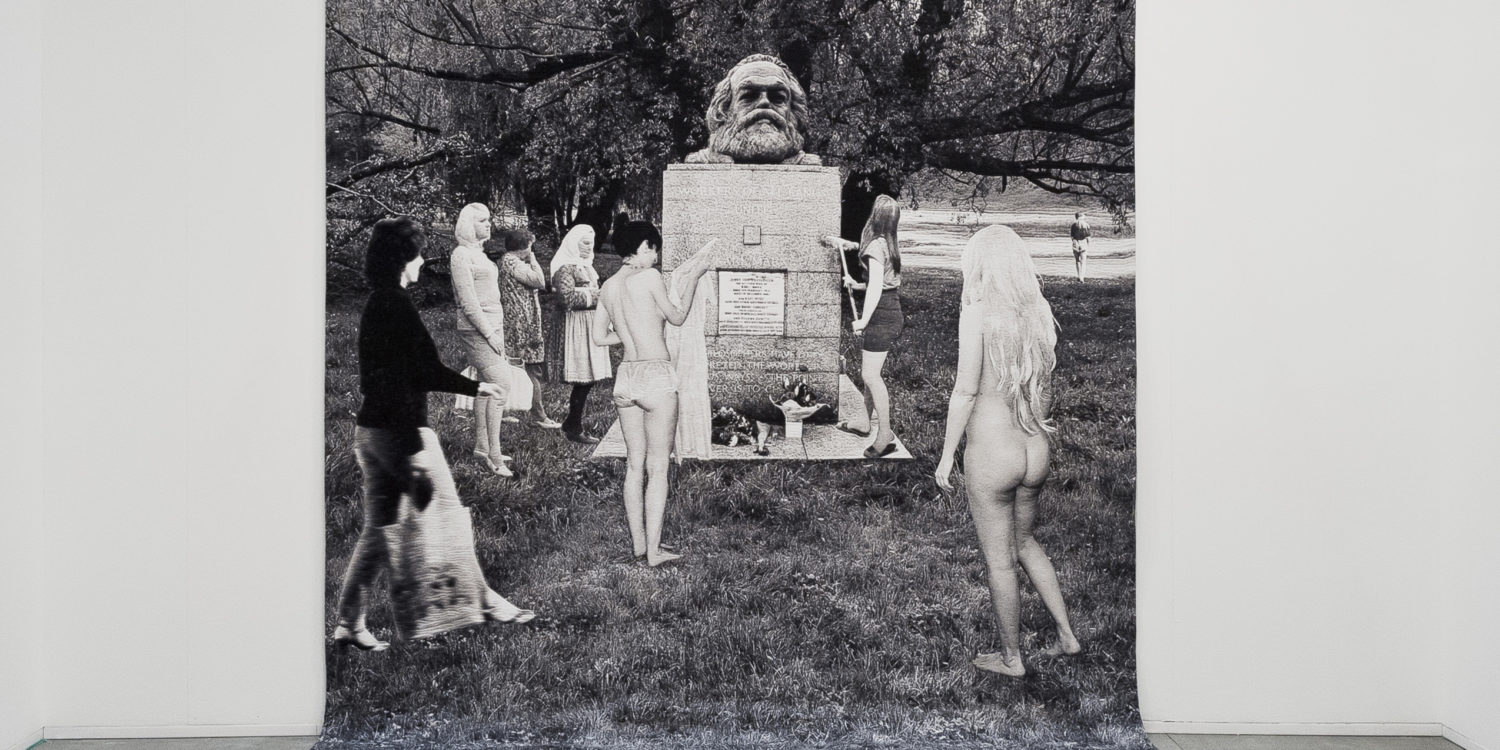 Goshka Macuga: Death of Marxism, Women of All Lands Unite, 2013. 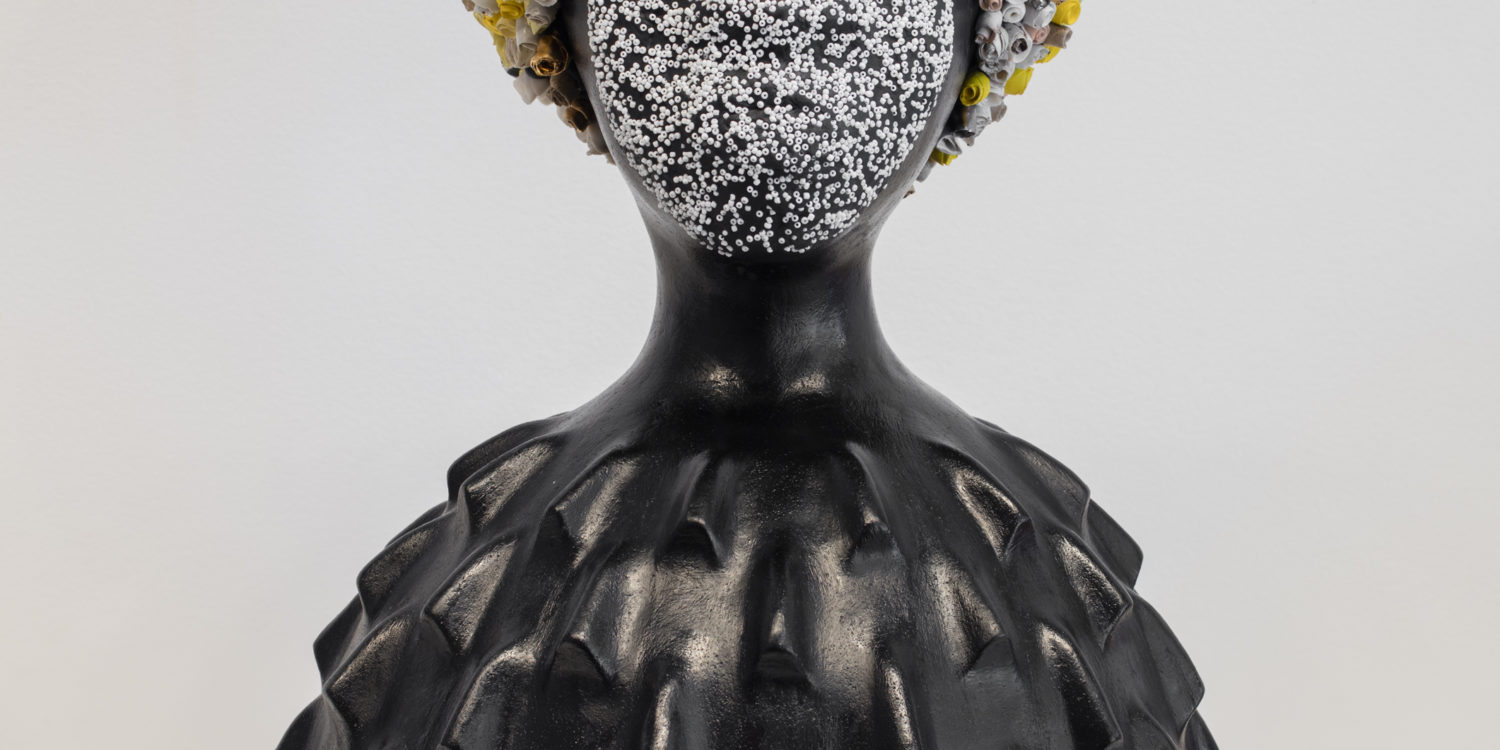 New Time: Art and Feminisms in the 21st Century

Now at UC Berkeley Art Museum and Pacific Film Archive (BAMPFA) are nearly 140 powerful works by a broad collection of 77 contemporary feminist artists. “New Time: Art and Feminisms in the 21st Century” seeks to survey the disparate nature of feminist art — no single concept, style, media, geography, sexual identity, philosophy, or lifestyle limits this exhibit. And that’s what makes it so vibrant, fresh, and unique.

“New Time” was developed by the [then] BAMPFA curator Apsara DiQuinzio. She originated the Feminist Art Coalition after the 2016 presidential election and the 2017 Women’s March. The Coalition’s goal was to stage exhibitions and events focused on feminist thought and practices. The group eventually grew to more than 100 arts organizations across the United States. Planned exhibits, delayed because of the pandemic, postponed the BAMPFA show until late summer 2021. DiQuinzio chose the title “New Time” from a poem by Leslie Scalapino.

One of the largest shows in BAMPFA’s history, “New Time” takes up more than half of the museum’s gallery space with (most) of the work produced within the last 20 years. It displays pieces by many established and familiar creators, like Louise Bourgeois, Judy Chicago, Jenny Holzer, Simone Leigh, Marilyn Minter, Pussy Riot, Kiki Smith, Kara Walker, and Francesca Woodman. Other artists you may have the pleasure of viewing for the first time, such as Chitra Ganesh, Nikki Green, Goshka Macuga, Mai-Thu Perret, Christina Quarles, R. H. Quaytman, Lorna Simpson, Amy Sillman, and Wu Tsang.

The only constant of “New Time” is its feminist underpinnings. The show uses media including paint, photography, fabric, ceramic, video, and mixed-material assemblage. The message is as varied as the artists’ political, religious, and sexual philosophies.

One shouldn’t go to this exhibit to see merely pretty pictures, although many of the art objects are appealing. Instead, the reason is to view various feminist visions of life and art and understand what led to the creation of the images. If there is one binding principle to the presentation, it is that women, feminism, and art are all multi-faceted. The exhibit is loosely organized into eight different themes to enable viewers to understand the diversity better.

The prelude one sees at the very entrance to the gallery is “Arch of hysteria,” with images from the late 19th Century. This section is in response to negative sexual stereotypes that historically have demeaned women. In fact, “history” still lives since the former US president is known to ridicule women for their “hysteria.”

In “Returning the gaze,” the theme is turning around the practice of heterosexual men’s observation of women, with women’s critical views. For example, “The body in pieces” involves fragmented representations of the female body. Does Lorna Simpson’s “Polka Dots and Bullet Holes #2,” in which a headless woman’s dotted dress bleeds into bullet holes, signify violence or liberation?

Some of the other themes include “Time as fabric,” “Womxn workers of the world, unite!,” “Too nice for too long,” and “Gender alchemy.”  “Gender alchemy” includes pieces by cisgender women, nonbinary artists, transgender women, and a male artist, Kalup Linzy, a video and performance artist. In the video “Conversation Wit de Churen II: All My Churen,” Linzy plays all the female and male characters in a hilarious parody of a very white soap opera.

“Death of Marxism, Women of All Lands Unite” by Goshka Macuga first appears to be a photograph of the worship of Karl Marx’s grave by a group of nude and scantily clad women. However, Macuga added photos taken by Czech photographer Miroslav Tichý of unsuspecting women and pasted them onto the gravesite image.

Outside the main gallery is a wall of cleverly barbed posters by the Guerrilla Girls, an anonymous group of women artists/activists who blasted museum curators and galleries for ignoring female artists. Although the “Girls” began their work in the 1980s, their message is unfortunately still relevant. I particularly liked the one with the caption, “Do Women Have To Be Naked To Get Into the Met. Museum?”