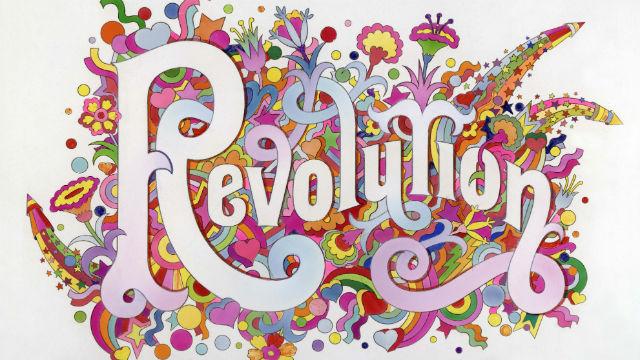 What is the continuing fascination with the 1960s and what was the impact of that swinging decade on subsequent decades and generations? This major new exhibition at London’s Victoria and Albert Museum explores the significance and impact of the late 1960s on life today, through global civil rights, neoliberal politics, multiculturalism, environmentalism, consumerism, computing, counter-culture, fashion, music, and graphic design.

Drawing on the museum’s varied collections, together with some important loans, the show highlights the people and places at the forefront of the cultural and social upheaval the decade wrought. Curated by Victoria Broackes and Geoffrey Marsh, who also curated the V&A’s hugely popular “David Bowie Is…” 2013 exhibition, the show uses the music of the time – The Beatles and the Rolling Stones in the UK, Miles Davis, Sam Cooke, Bob Dylan, The Mamas & the Papas, Joni Mitchell, Jimi Hendrix in the USA – as the jumping off point to examine the social, cultural and political context in which that music was created. To further reinforce this, a soundtrack of music from the period, selected by cult British radio presenter and musical tastemaker the late John Peel, plays throughout the displays.

I was born the year this exhibition takes as its starting point and many of the exhibits seemed very familiar (and a touch tawdry when viewed 50 years later) from my childhood. I remember (just) watching the grainy film of the 1969 Apollo moon landing on our small black and white television, and my mother embraced flower power, in a watered-down suburban way, by making her own maxi dresses. So much from this era filtered into the 1970s, adding a much-need dash of swirly colours and sitar sounds to a decade marred by economic recession and industrial dispute which basically ended when the Punk movement came along and tore up the newly-minted 1960s rule book.

The late 60s, and its colourful cast of characters, movements, and sounds, has been thoroughly mythologised by those who lived through it, handed down to their children and grandchildren as the benchmark by which all alternative lifestyles and anti-establishment movements are now set. And rightly so, in many respects, for this is the period which spawned political sea change in the civil rights, pro-choice and anti-war movements, all of which have had a lasting impact on our society today and creating many of the liberties which we now take for granted. Alongside this, the new-found freedom of expression and counter-culture of the 1960s, expressed through fashion, music, art, graphic design, underground literature, pirate radio, drugs and psychedelia, has seeped into every area of our lives today – from the music festival to the Apple computer.

The V&A’s exhibition illustrates these ideas through displays focusing on music, fashion, art and design. There are dresses by Mary Quant, a skimpy sequined all-in-one worn in concert by a lithe Mick Jagger, Mama Cass’s kaftan, all displayed alongside myriad photographs and graphic images from the time: pictures of a young Michael Caine, model Twiggy and fresh-faced Beatles (whose jackets from the Sergeant Pepper album cover are also on display), all of whom have become icons of our popular culture. There are psychedelic posters, all bilious clashing colours and swirling lines, hand-written lyrics by John Lennon, a guitar belonging to Pete Townshend of The Who, and the Jacobsen chair, used in Lewis Morley’s famous photograph of a naked Christine Keeler, taken at the time of the Profumo Affair.

The exhibition is replete with audio-visual displays, the most impressive being in the display about the Vietnam war, in which a helicopter appears to hover overhead, or in the Woodstock room (which has bean bags and faux grass for a carpet) where a giant screen relays performances of Hendrix et al. There is so much material in this exhibition that one quickly becomes saturated, and I would recommend several viewings to take it all in. It’s noisy and frenetic, perhaps to recreate the febrile excitement of the time, but sometimes I felt the show was just trying too hard to get its point across, and some of the displays seem clichéd – why do we always have to mention the Profumo Affair when talking about the 1960s? – as well as too British-centric. And if you look beyond all the attention-grabbing audio-visuals and the music, you might just see a rather conventional run through the decade of revolution and rebellion. Having said that, it’s quite fun and nostalgic for those of us who can remember some of it, and for the younger generation, it’s an opportunity to examine what their parents and grandparents considered to be the best of times.

The exhibition is presented with the support of Levi’s, Sennheiser, Fenwick and Sassoon.