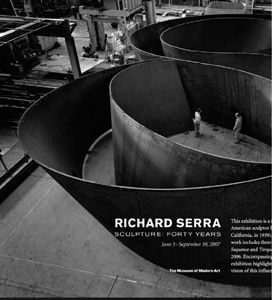 As someone old enough to have been aware of Richard Serra’s career for most of the forty years this show purports to survey, I’ll admit that my respect for his work has fluctuated from time to time. At this moment I think he’s a master – an opinion happily gathered over time through the accumulative benefits of compound interest.

His early sculpture was brash, muscled, edgy, and cool – assertively appealing in the controlled and contradictory use of weight and weightlessness, danger and refuge, beauty and ugliness – and all executed with a kind of hard- scrabble grace out of elegant/raw industrial materials with beautiful surfaces: lead, rusted steel, neon lights and poured black rubber.

When a court ordered the removal of his "Tilted Arc" sculpture from its site in front of the lower Manhattan Federal Building in 1989, my discomfort at seeing a public artwork forcibly removed from its designated location was mitigated to some degree by my irritation for what I took as the artist’s arrogance, in plopping a multi-ton, muy macho impediment across a well-worn path that workers used to get to their jobs. It left a whiff of art-world alpha-male entitlement that lingered around Serra’s monumental work for some time after. His balanced contradictions no longer seemed like broad-shouldered poetry. Many of the aspects of the work to which I had been attracted changed, or at least my perception of them changed. The works’ monumentality became arrogance; the rusted up-thrust of Cor-Ten steel became masculine braggadocio; and the precise balance of elements became showing off. The work seemed a kind of bullying architecture, about itself and its author, loftily unaware of the consequences visited upon those left to inhabit a place so airily constructed after the designer had moved on.

While wrong about that lack of awareness of consequence, I was not so wrong about that sense of entitlement, arrogance and braggadocio – though now I regard these as expressions of the commitment, ambition and constancy that one desperately hopes to find in artists and their work.

In fact, the use of steel to alter the behavior and movement of those who encounter it – the most infuriating thing about "Tilted Arc" and its manipulation of those government workers – has become what I like best about the work in this show, that engagement between a sculpture/structure and an interested viewer/participant.

Of course, the context is different. "Tilted Arc" blocked and herded those workers like sheep. And to be herded is a decidedly unpleasant experience for anyone who has no interest in being told where to go. But Serra is a bit of a control freak. He is, of course, a Scorpio (I knew it!), and a very determined choreographer who engages his audience/performers directly and is not above using a little intimidation to get us to perform the dance he means for us to complete.

There are three pleasures in dance. The choreographer’s – setting movement on the bodies of others; the audience’s – watching the dancers move; and of course the pleasure of the dancers themselves – dancing.

To wander around Serra’s early works of balanced slabs of lead, apparently precariously pushing against one another to transform gravity into structure, or to enter his recent steel arroyos with their monumental torqued walls, enhanced specific gravity and velvety rusted surfaces, you can experience all three pleasures. You become maker, dancer and audience member all at once.

It is a pleasure freely offered and you don’t need to rehearse, exert yourself, or even know the first thing about all the art history that Serra has learned from, or addresses with these works.