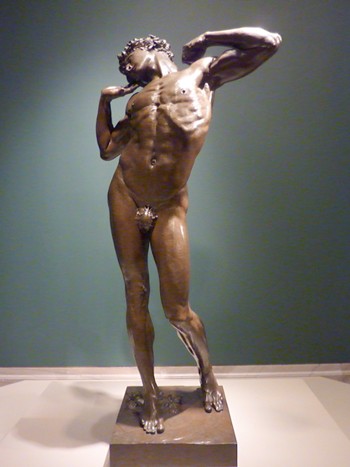 In the midst of the smoke, grime and poverty of England’s Industrial Revolution, forward-thinking artists and artisans chose to create beauty for its own sake. Artists and designers including Dante Gabriel Rossetti, James McNeill Whistler, William Morris, E. W. Godwin, Edward Burne-Jones, and Christopher Dresser rejected narrow Victorian social and artistic codes. Instead, they favored soft dream-like colors and shapes, for their beauty as an end in itself, not as a means for any “higher” purpose. This movement became known as the Aesthetic Movement, the forerunner of the Arts and Crafts and Art Nouveau movements.

“The Cult of Beauty” is a dazzling exploration of this era; it highlights the best and most beautiful examples of Victorian avant-garde painting, interior decoration, furniture, architecture, photography, and fashion, both hand-made and manufactured. The exhibit was created and shown at London’s Victoria and Albert Museum and was on view in Paris’ Musée d’Orsay. San Francisco’s Palace of the Legion of Honor is the only venue in the United States where one can see this rich and diverse collection honoring the Aesthetic Movement.

Similar to the disputes between the traditional French Salon and the Impressionists, British traditionalists, such as critic John Ruskin, favored realism and saw art a means to improve and educate people, whereas what mattered to the avant-garde artists was not the subject of their works, but the emotions they stirred in the viewer. They wanted to create art and objects that existed solely to be beautiful and sensual. No moral meaning was necessary.

This well-curated collection of more than 180 marvelous work of art is divided into four main chronological sections that chart the development of the Aesthetic Movement. The influence of Asian art and architecture permeates the exhibit, including China’s Blue and white Nankin porcelain and numerous Egyptian symbols. The influence of Japanese design, fashion and artistic technique is particularly well shown and mirrors the Japanese influence in French Impressionism and post-Impression.

At the exhibition, you’ll see James McNeill Whistler’s lovely impressionistic series of paintings of the night harbor, his “Nocturnes,” each made using a blue or light green palette. Critic John Ruskin wrote a scathing critique of the “Nocturnes,” stating, “… I never expected to hear a coxcomb [fool] ask two hundred guineas for flinging a pot of paint in the public’s face.” Whistler then sued Ruskin for libel; after a long trial, Whistler was awarded only nominal damages and had to pay court costs. Feeling betrayed by his former patron Frederick Leyland, Whistler created caricatures of him, including a derisive satirical painting called “The Gold Scab” that is a standout in the show.

An exciting aspect of “The Cult of Beauty” is seeing how the artists added beauty to a variety of day to day practical items — wallpaper, furniture, fans, jewelry, clocks, andirons, and clothing. Don’t miss the part of the exhibition in Galleries 1 and 2 on the first floor containing examples of luxurious women’s clothing that liberated the Victorian woman from tight corsets of the Victorian era.

The press tour of the exhibit was introduced by Her Royal Highness The Duchess of Kent, the wife of Prince Edward, Duke of Kent. An erudite and charming woman, she confided that whenever she attends a museum show, she mentally chooses several items that she would like to steal. The Duchess of Kent chose Thomas Jeckyll’s “Four Seasons Gates,” which combines wrought iron scrollwork with Japanese images.

I second her choice, and add to it the luxurious bronze sculpture by Frederic Leighton, “The Sluggard,” the electroplated nickel and silver teapot designed by Christopher Dresser for James Dixon & Sons, and Dante Gabriel Rossetti’s oil painting, “The Daydream.”

As you wander through the splendid pieces that comprise “The Cult of Beauty,” it will be easy for you to choose your own items to “steal.”