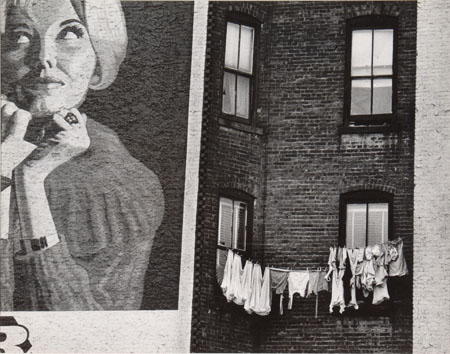 “The Radical Camera: New York’s Photo League” is a stunning show that explores the uncompromising group of photojournalists who worked largely in New York City from 1936 until 1951. The League was a leading school and cooperative where students and professionals learned the art and science of photojournalism. Their goal was to use their skill and talent to encourage social change by photographing and publicizing the lives of the poor.

With the recent availability to them of small inexpensive 35 mm cameras, they were able to walk city streets and record the diversity of New York’s urban scene. From street scenes to candid portraits, they captured the essence of the faces and lives of New Yorkers.

Now on display at The Contemporary Jewish Museum of San Francisco and next at the Norton Museum of Art, West Palm Beach, the photographs are as striking, poignant and effective as I imagine they had been when first shown. Although these black and whites capture a time and place long gone, their power and beauty are enduring.

The exhibition is divided in sections. “Precursors” displays works by Hine, who had trained as a sociologist, and Strand. “Wall Street” (1915) is one of Strand’s most evocative photos, showing the imposing J.P. Morgan Building with insignificant people scurrying by.

In the “The Great Depression” section, Sidney Kerner’s “Pitt Street, New York” (1938) stands out to me particularly, since not only is it a great photo, but my father was born on Pitt Street in 1912. The Sol Prom (Solomon Fabricant) photo, “Untitled (Dancing School)” (1938) shows a group of girls at a dancing school in Harlem. This photograph along with others is part of the “Harlem Documents” that has its own section is this show.

“The War Years: Photo Hunts and Crazy Camera Balls,” contains both pro and anti-war photographs. Walter Rosenblum’s gritty “D-Day Rescue, Omaha Beach” (1944) is a compelling close-up of a soldier, whereas Sonia Handelman Meyer’s “Hebrew Immigration Aid Society” (1946) and Arthur Rothstein’s “Refugees Looking at List of Survivors, Shanghai, China, 1946” are gripping portraits of people caught up in the aftermath of WWII.

Unfortunately, as the Cold War, the anti-communist Red Scare and Joseph McCarthy overtook America, the League was named as a subversive organization. Despite the denials, the group itself and many of its photographers were blacklisted, leading to the 1951 dissolution of the New York Photo League. By recapturing the influential and provocative work of the Photo League, the exhibition reminds us that it lasted for a only a brief period of courage and excellence before being devastated by scare tactics worthy of our WWII enemies.

“The Radical Camera: New York’s Photo League, 1936—1951” was organized by The Jewish Museum, New York, and the Columbus Museum of Art, Ohio.