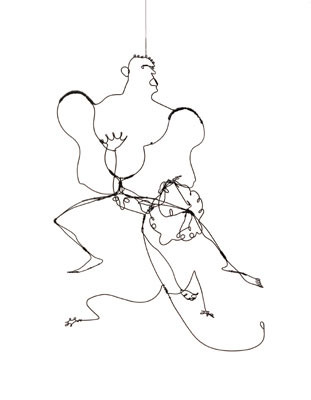 The 1998 blockbuster Calder retrospective drew nearly 300,000 visitors to Washington’s National Gallery and drew huge crowds when it was installed at the San Francisco Museum of Modern Art later that year. With some 250 works on display, the exhibit spilled over with the joyous creativity of this, arguably, most popular 20th century sculptor, pleasing the public and, in turn, pleasing the museums with high ticket and gift shop sales, along with a surge in memberships.

The Surreal Calder is a smaller (about 40 works) exhibition, covering work mostly from the 1930’s and 1940’s which trace the sculptor’s early roots in Surrealism. Organized thematically, rather than chronologically, the early works are connected to the Surrealists’ "automatic drawing," in which random and spontaneous expression was emphasized as a way to release the subconscious impulse into art. Calder used continuous line drawing which he adapted to his innovative wire sculptures such as "Goldfish Bowl," a work which was meant to be seen in movement through a crank. (Alas, it remains motionless as exhibited here.) While "Goldfish Bowl" offers an example of the whimsy for which Calder is noted, "Hercules and Lion," is a more interesting piece, bursting with energy, morphing mere wire into genuine wit.

A second grouping of works explores the "surrealist object," essentially sculptures made from diverse "found" materials to achieve unexpected effects. "Gibraltar" earns its title in its large, solidly balanced wood base, then takes off into fantasy with a white ball that seems about to roll away and two airy, floating elements like kites or inflated balloons soaring upwards. "Apple Monster," a painted apple branch, uses that found material and then adds a dangling appendage suggestive of the sexuality never too far from the surface of surreal explorations. It’s also an example of another theme of the exhibit, the "marvelous personages," creatures of the imagination.

The Surrealist viewpoint also encompassed the natural world, imbuing it with the uncontrolled, spontaneous impulses of the unconscious. Calder expresses this most often in mobiles and stabiles that often take both form and images from the branching forms of plants and trees. "Four Leaves and Three Petals" balances those elements with gracefully curved "branches" and a delicate tracery of (perhaps) budding twigs.

A small handful of included works by Calder’s contemporary Surrealists (such as Ernst, Magritte, and Miro) seems to have been chosen more for convenience (or economy) than for adding significant insight into those artists’ influences and connections to Calder’s work.

The majority of the works included in The Surreal Calder belong to the Calder Foundation, many of them rarely seen. That alone makes the exhibit worth a look, but then any collection of Calder works is guaranteed to provide a leap into a world of uninhibited imaginativeness, unbounded creativity, and the whimsicality and wit of a master.