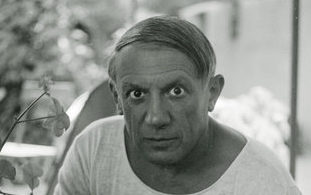 A Life of Picasso IV’ The Minotaur Years is art historian John Richardson’s fine line portrait of the revolutionary artist and inscrutable man. Even if you haven’t read the previous installments- The Minotaur Years 1933-43 enthralls on every level- as bio-history of an artist at the height of his artistic powers, as his personal life spiraled out of control and Europe was bracing for war.
Richardson chronicles one of the artists most prolific and defining periods. Even though he was a progenitor of ‘surrealism’ Picasso was adamant about not being categorized as one. In the 30s, Picasso traversed Europe, setting up permanent and makeshift studios on all over the continent. Luminaries in Picasso’s orbit including artists Salvador Dali, Jean Cocteau, Paul Klee, Writers couples Jean-Paul Sartre and Simone de Beauvoir; and Gertrude Stein and Alice Toklas (Pablo liked Alice better that Gertrude), and a bacchanalian clique of European luminaries, as they vacationed sometimes in desperation as Europe hurtled toward war.
Picasso left Spain for France as a young artist, and only visited a few times in the lead up to the Spanish Civil War. By the 30s he was committed the anti-Fascist movement, at his own peril. during General Franco reign, Picasso feared Franco who try to extradite him and soon he wasn’t safe even in France. But even the Vichy collaborators didn’t touch him because of his international fame.
Picasso was generous with his money and artwork in aid of his contemporaries in Spain and freedom fighters in Spain. He arranged safe passage to many of those who fought against Fascism. In 1936, Picasso, by then the most famous living artist in the world and named him director of Spain’s Prado Museum, in absentia. But soon the museum itself was under threat and all of the artworks had to be moved to the basement, and eventually hidden so they wouldn’t be destroyed or seized by the Nazis.
Richardson’s masterful observed chapter on the creation of Guernica, is the heart of the book, as Richardson dissects the circumstances of its creation and its artistic, social, and political impact. Actually, Richardson’s fascination with the artist started when he first saw the painting in 1938, then just a high school student, when Guernica was on tour in London after its debut exhibition at the Paris World’s Fair. the impact of the painting changed his life.
As Richardson details, as humanitarian an artist Picasso could be, he was less sympathetic in his personal affairs. He and his Russian wife Olga, a former ballerina, went through an acrimonious divorce and he was also neglecting their troubled son Paolo, who was receiving psychiatric treatment, at a sanitorium in Switzerland.
Among his most famous paintings of this era were expressions of his torturous relationship with photographer Dora Marr and was attacking her on canvas with grotesque ‘scenes de action’ and portraiture, that, she tolerated. Meanwhile, he was further humiliating Maar, by flaunting his love with Marie-Therese in public and on canvas.
Even as Richardson doesn’t judge Picasso’s misogynistic ways, he doesn’t avoid the describing how toxic it was. It is hard to dismiss its brutality as he unresolved aggression toward Maar is depicted in disturbing and humiliating scenarios depicting her face or body. Picasso casting himself as the Minotaur, with a male body and a bull’s head, Maar face and body grotesquely depicted.
Picasso started his affair with Maar while still very much involved with Marie Therese, and in interviews with Maar, Richardson reports that “Picasso enjoyed playing the two adoring women off against each other, as his paintings bear out.
On some level Picasso was self-aware of this sadistic imagery, His many canvasses of both Dora Maar and Marie Therese are full of creepy contrasts-. Maar often portrayed with hostile cubist or distorted bodyscapes, Marie Therese often an image of warm, sexualized, or beautified curves
His other relationships were full of conflicts as well. During this period Picasso was estranged from his aging mother because she sold some of his early sketches without his knowledge and he had to take legal action to reclaim them. Picasso was accused in public for not supporting her after he became rich. They reconciled finally. He regretfully he didn’t attend her funeral over certainty that he would be arrested there.
Aside from all the relationship problems. Picasso fought, along with his agent with the established art world, even resisting a Picasso retrospective at MoMA by powerful curator Alan Barr, negotiations were hostile on Picasso’s side, but Barr convinced them. The expansive exhibition included loans and previously unexhibited works held by both Rosenberg and Picasso.
Meanwhile, his artworks were being hidden over fears that the Nazis would seize them. The MoMA show was a smashing success, which Pablo did not attend. He was in a depressed mood, still fearing extradition to Spain, and desperately trying to secure French citizenship, as the Vichy regime was about to take over.
Picasso’s life was full of drama, personal, political, and artistically, and it is all sharply observed by Richardson. The author died in 2019 and this final installment of his Picasso series is exemplar of the biographer’s craft and authoritative and assessable prose writing about art.
Throughout the text there are photos of Picasso, his family, lovers, friends, and artists, some of the best ones taken by Dora Maar. Also, the selected ‘gallery ‘of beautifully transferred color plates of Picasso’s Minotaur, is particularly well-curated, all of which are all specifically analyzed in the text by Richardson.