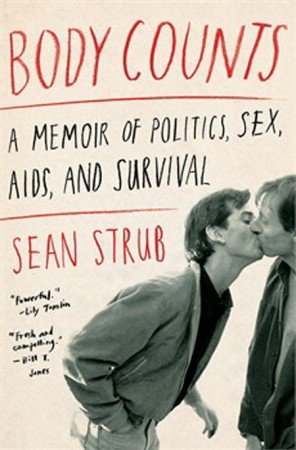 Sean Strub’s resume includes being an entrepreneur and failed congressional candidate, but his biggest achievements are as an AIDS activist. A longtime HIV-AIDS survivor, Strub founded the magazine POZ, the first publications of its kind and was a high-voltage forum and flashpoint for HIV-AIDS empowerment Strub recounts the darkest days of the AIDS epidemic as he lived them in his new memoir Body Counts: A Memoir of Politics, Sex, AIDS and Survival. The book is a manifesto that can be counted among the substantive literature by gay men and women in a most perilous time.

He started his career as a page in the State house in Iowa. Fascinated by politics, his enthusiasm soon landed him in the nation’s capital as elevator operator in congress, where he was well liked by conservatives and liberal politicians. He soon had dreams of a political career, but ten years later, he would be arrested for his civil disobedience, as he was about to chain himself to the White House fence as an HIV-positive out gay man on the front lines of AIDS activism.

As a teen, Strub was not only in the closet about being a Democrat to his Republican, Catholic conservative parents; he was also in the closet about his sexual identity. In Washington, Strub became disenchanted and even horrified at the closeted gay politicians who perpetrated elaborate covers, including legislating against anything pro-gay, to contain any suspicions about them. Meanwhile, Strub details a culture of morbid networks of sexual sedition where politicians created a closeted society in Washington He became involved with unhealthy, one-sided relationships, but started to use his sex appeal to his advantage. Eventually his growing desire to be part of the nascent out and proud civil rights GLBT movement, took him to the more positive New York scene.

Strub admits that he in fact used sex to advance his career and that psychologically it resulted in a destructive self- image. Yet he continued to be politically active within the inner sanctums of power and he started to identify himself as a political operative for liberal causes. Eventually, he moved to New York, came out to his parents, started having as much sex as possible at the baths and explored the concept of more meaningful relationships.

He was caught up in the New York Village scene of clubs, baths and discos and was politically connected enough not only to get into Studio 54, but into George Steinbrenner’s skybox at Yankee Stadium with John Lindsay. And he was just 22. He also was a delegate at the Democratic National Convention held in New York, initially backing Ted Kennedy’s bid for the 1980 Democratic Presidential nominee. He switched to Jimmy Carter, but his political career was on hold when he came down with hepatitis.

Months in bed and a mysterious lingering swelling of lymph nodes didn’t prevent him from recovering. On one of his first nights out of the house, he was returning home from dinner with friends when he noticed police cars in front of the Dakota Building and he was, in fact, the first person to see what had just occurred, John Hinkley had gunned down John Lennon. Major media outlets immediately pursued him as a witness to the shooting.

Still recovering from hep and the ominous scenes in New York, Sean was invited for respites in the privileged world of old Philadelphia money with his friendship with James Biddle, he was surrounded by then A-list moneyed gays, but this time he refused to buy into the class institutions of the moneyed closet.

He was traveling to the network of AIDS activist conferences and retreats; his input was sought in the formation of GLBTQ social service organizations. He had a series of more meaningful affairs with out gay men, including with pioneering activist-writer Vito Russo. Strub’s mini portraits of the main figures of the early years of AIDS activism against the backdrop of toxic antigay politics during the Reagan years, is dynamic and vividly analyzed.

Strub is also very candid about his liberated sex life, distinct from and including his long term relationships. His chronicle of loosing his partner Michael to AIDS is written with heartbreaking candor. He eloquently shows that the journey of self discovery as a gay man  is a lifelong process of discovery. At the lowest point in his illness, when he literally had one – T cell to combat the host of illnesses starting to infect his body, including internal KS. He retreating from his editorship of POZ, as well as activism and made peace with his past, starting to recover painful repressed memories of sexual abuse. He reconciled what they meant negatively in his life and their relationship to his identity as a gay man. He eventually sought out his abusers as part of his recovery.

Strub was probably on the brink of death when he started to respond to the new combo-antivirals that were starting to be available in the mid-nineties. He was able to reclaim and rebuild his life. He may be on a different professional path, but his activist voice is as vital as ever in Body Counts.