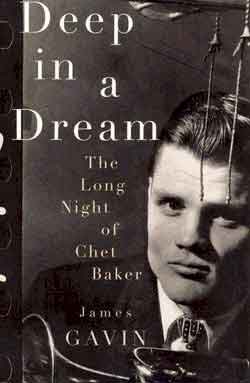 If James Gavin’s biography Deep in a Dream: The Long Night of Chet Baker was fiction, it would have a shot at being the great American novel. The bootstrap story of a poor trumpeter (with missing teeth) who couldn&#146;t read music, going on to became the most celebrated and reviled jazzman of his time is the stuff that dark allegorical American sagas are made of. Baker&#146;s notorious drug addictions, messy personal life, and mysterious demise–falling out of a Parisian hotel window–even give it Dostoevskian dimension.

But, this is a biography and, maybe not quite accidentally, where Baker was often accused of being a technically deficient musician, Gavin&#146;s book runs roughshod over some of the biographer&#146;s duties to his craft. Baker&#146;s high school and military years, for instance, take up little more than a few pages. Why are careful details on Baker’s mother’s stint as a five-and-dime store manager provided, with only a minimal recounting of her son&#146;s tour of war-torn Europe after World War II and his re-enlistment to avoid jail?

On balance, these flaws are minor, because the aggressive and meaty approach in Deep in a Dream capture the real flesh and blood Baker–not a small feat with a subject who worked overtime to blur, rewrite or escape truths about himself and events in his life.

Gavin, author of Intimate Nights: The Golden Age of New York Cabaret writes vibrantly of the music and politics of the jazz world and of Baker&#146;s elusive persona, not flinching at exposing the best and worse of his character.His portrait of the trumpeter, who was called "a demon with an angel face" in an Italian courtroom when he was on trial for trafficking drugs, is not a pretty picture, but it is certainly a page turner. Baker&#146;s self-destructive con-man personality played at being both brutal and poetic and it comes fully alive in all of its facets in Gavin&#146;s treatment.

Gavin&#146;s skill in evoking the look, sound and culture of jazz clubs is invaluable. He renders concise snapshots of the musicians Baker encounters–from little known sidemen in his first gigs at a beach dive, the Haig, north of Los Angeles, to the jazz titans who headlined at the legendary Birdland in New York. As Baker&#146;s career takes hold, gaining him instant recognition and notoriety playing with Gerry Mulligan&#146;s Quartet at the Haig, so do the myths and rumors.

Baker immediately started to overshadow the egocentric, antagonistic and drug-addicted, Mulligan (shortly to be jailed on drug charges) while starting his career as a headliner and mainliner. Indeed, drug use was considered the rite of passage to the sublime music and very few resisted the temptation, no matter what the personal cost.Baker is eventually taken under the wing of the legendary Charlie &#145;Bird&#146; Parker, himself burnt out on drugs by his early 30s.

Gavin has great stories to tell about the changing jazz scene of the 50s, with the old guard of big band vets floundering in a changing market and virtuoso players like Charles Parker, Dizzy Gillepsie, Miles Davis, Thelonious Monk breaking new ground every night in clubs all across the United States.

Gavin&#146;s describes Baker being relentlessly pursued by a Los Angeles narcotics agent who went gunning for musicians using drugs, fixated on the trumpeter&#146;s cool persona as being culturally subversive.And he gives the sessions musicians who weren&#146;t famous, but just as musically influential, their due.Baker&#146;s delicate singing brought accusations of homosexuality, which by Gavin&#146;s account made him even more macho.The rumors persisted, particularly over his devotion to an innovative young pianist, Dick Twardzik, who died with a needle in his arm, a tragedy which affected Baker&#146;s whole life.

Gavin also lends an even hand to the controversies then and now over Baker&#146;s talents as a singer Dismissed as unskilled among jazz singers of the time like Ella Fitzgerald, Frank Sinatra, Billie Holiday, and Sarah Vaughan, Baker&#146;s plaintive singing voice actually developed because he was nervous over not being able to read music. His vocalizing has been revalued since and has influenced other singers.

Gavin leaves no stone unturned on Baker&#146;s personal life, often of tabloid taste with vulgar factoids such as genital sizes of musicians or pulpy scenes of a gun-slinging jealous wife.His deft analysis of Baker&#146;s music, too, is eventually overwhelmed by the gory details of his life as an addict and the book starts to read like a rap sheet.

Baker, professionally humiliated in the United States and Europe at the height of his success and on the ropes with his addiction was nonetheless hailed as a hero in Italy at the same time he was on trial for illegal drug use.The trial was reported in newspapers and trade magazines and after his conviction and incarceration, Baker became an artistic icon. Upon his release, he seemed to have all of Italy at his feet. Rich fans gave him land and set him up in clubs while the media exploited Baker&#146;s addiction and colorful personal life.

Baker aficionados who are looking for a thorough examination of each stage of his life will be scratching their heads at sloppy gaps in the biography. Gavin&#146;s reliance on hearsay evidence during hazy aspects of Baker&#145;s life is suspect. And, after the impression of heroin chic illustrated in Bruce Weber&#146;s smoke and mirrors documentary about Baker, Let&#146;s Get Lost, an accurate biography is certainly needed, especially now as Baker&#146;s music is enjoying a resurgence.

Gavin&#146;s fascinating work adds to the drama and mystique of Baker&#146;s dual nature, drawing a portrait of a sexy, self-effacing, self-destructive talent whose disillusionment fueled both magic and destruction.

A companion disc of Baker&#146;s best work has been issued by Blue Note Records.