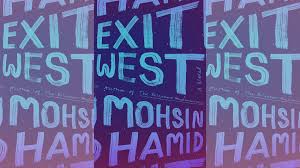 “Exit West,” by Mohsin Hamid is a creative, complex, deeply felt saga that reads almost fable-like. Set in an unnamed Middle Eastern City on the brink of civil war, readers are introduced to the main characters of Nadia and Saeed on the brink of falling in love. They are young gen x’ers who couldn’t be more different in personality – she is self-assured and independent and happily living alone, to his tender, quiet ways, dutiful to the parents he still lives with. They meet while taking evening classes, growing closer as they watch their country quickly fall apart. At first they can meet like normal new dating couples at cafes and coffee shop, but when soldiers with guns, curfews and checkpoints become their reality, their romance is interrupted and challenged until Saeed loses his mother to a bullet and he suggests Nadia would be safer with he and his dad.

It’s not long before this make shift family realize the only real safety is out of their country, and the young lovers become refugees in other lands. The transition to Greece, England and ultimately America in the San Francisco Bay Area, is done almost magically as they go through doors that act as portals to their new locations. Settling in new locales is fraught with challenges on every level and takes it toll on the protagonists individually and as a couple. Hamid, known for his earlier novel, “The Reluctant Fundamentalist,” deftly draws fully realized characters and situations, subtly inviting the reader into their hardships and mindset. Intermixed throughout the story are vignettes about other secondary characters. Although, unlike Saeed and Nadia, these characters and their situations are not complete or as complex, they are interesting and add value to every scene they possess. Hamid is successful in steering the reader to sympathize with not just Saeed and Nadia, but with the immigrant story. You quickly realize these aren’t just black and white situations. They had a home and family, and now face an uncertain future. They aren’t “the others,” they are humans in search of inclusion and a better life