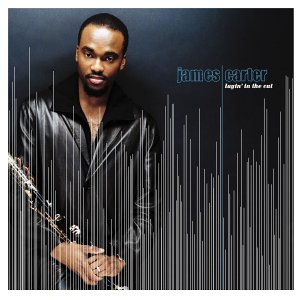 Tenor saxophonist James Carter has risen to relative prominence in the current "serious" jazz scene; he’s not the name Joshua Redman is, but he’s a far better and less hokey player, not as willing to blatantly pander to the crowd as Redman. Each of Carter’s albums has been significantly, wilfully different from the others, something which can’t be said about many jazz musicians today.

On Layin’ In The Cut, Carter lays claim to the legacy of mid-70s and 80s "free funk," a music pioneered by Ornette Coleman and Ronald Shannon Jackson in the Prime Time and Decoding Society bands respectively. These musicians combined funk, rock and jazz in ways far divergent from the tepid "fusion" which sold zillions of records in the mid to late 1970’s. Prime Time featured the first flowerings of Ornette Coleman’s "Harmolodics" theories, which frankly remain incomprehensible when explained in speech or writing, but in music boil down to funk combined with the utter freedom of any instrument to switch between lead and rhythm roles at any time. Drummer Ronald Shannon Jackson’s Decoding Society took a different tack, fusing blues, gospel, funk, metal and jazz (and sometimes country) into a surging, full-throttle music which sent the listener’s brain frantically sprinting to catch up with the feet and ass, both of which were powerless to resist the music’s commands to dance. These two approaches are the twin poles between which James Carter hovers on this CD.

To assist him in his groove explorations, Carter has made his debts even more explicit by choosing a backing band composed almost entirely of ex-Prime Time and Decoding Society members. Guitarist Jef Lee Johnson comes from Jackson’s attack squad; bassist Jamaaladeen Tacuma and drummer Calvin Weston are both Coleman alumni. The other guitar chair is filled by Marc Ribot, well known for his collaborations with John Zorn, Tom Waits and John Lurie, as well as for his own work with the bands Rootless Cosmopolitans, Cubanos Postizos and Shrek.

Four of the disc’s seven cuts are collective compositions, or more likely group improvisations around a groove contributed by one member or another. Two other tracks are credited to Carter alone, and one, "Terminal B," is credited to Jef Lee Johnson. This piece is the disc’s most straightforward stylistic hommage; it could have come off any mid-80s Ronald Shannon Jackson album. Carter plays high-pitched squiggling runs on the soprano sax, as Weston and Tacuma churn the music continuously forward, the whole effect being something like a blues march in doubletime. All the album’s other tracks are less convulsive, but just as compelling, maintaining a loping groove which sometimes blends them together into an indistinguishable jam (as in music, not as in spreadable fruit) but which is never less than enjoyable. Even the disc’s final track, "GP", which throws a regrettable Latin rhythm into the mix, isn’t a total washout. Throughout, Ribot can be counted on to urp dissonant, jagged bits of skree and skronk out at odd intervals, never quite jarring the groove loose from its track but nonetheless shattering any risk of somnambulance.

This is not a landmark or ground-breaking CD, but it is the most interesting thing James Carter’s yet attached his name to (last year’s In Carterian Fashion was also excellent). It’s well worth hearing, if only for the surprise of finding out that they still make records that sound like this.