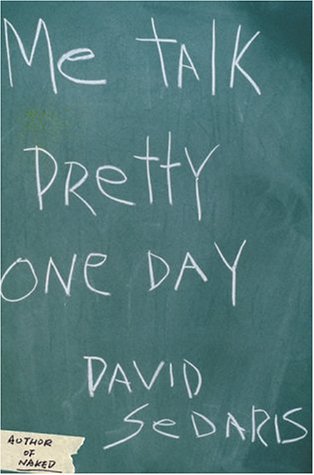 In his best writing, David Sedaris suggests a visiting anthropologist from a distant galaxy or some future civilization, observing and chronicling contemporary life with a mixture of curiosity, disgust, and outright befuddlement. His stranger-in-a-strange-land approach succeeds without undue mean-spiritedness, because time and time again he proves more than willing to turn his spiky wit inward on himself.

Sedaris’ first collection, Barrel Fever, was a mix of short stories and autobiographical pieces. One of the latter, "The SantaLand Diaries," made the author’s reputation seemingly overnight after he read it on NPR’s Morning Edition, and has since been turned into a theatrical production (not involving Sedaris). In his follow-up, Naked, Sedaris narrowed his focus onto his own family, at once sending up the memoir craze of the late 90’s and crafting one of the most vivid, scathing and poignant examples of the genre.

Me Talk Pretty One Day is something of a hybrid. Many of the pieces have previously appeared in Esquire or The New Yorker, and some of them surfaced last year in Sedaris’ touring one-man performance. The book is divided into two sections, the first of which is more or less a continuation of Naked. We meet Sedaris’ brother, "The Rooster" – the one member of the clan born after their father has been transferred to North Carolina, and thus a certifiable redneck. His prankster sister Amy, now the creator and star of Comedy Central’s Strangers With Candy, torments their father with a custom-made fat suit (she wears only the bottom half) and phone calls in which she does a deadly accurate impression of a female neighbor attempting to ensnare Mr. Sedaris into an affair. Indeed, the father emerges as the most complex and sympathetic character of this section, an apparently well-meaning man with absolutely no ability to relate to his children. Whether describing his failed attempts to turn the Sedaris kids into a jazz quartet or his peculiar notion of what constitutes edible food, the author’s portrait of his father is unfailingly as affectionate as it is nonplused.

The second half of Me Talk Pretty One Day not only gives the collection its title, but provides ample opportunities for Sedaris to employ his skewed outsider perspective. The author and his boyfriend Hugh move to France, where he enrolls in a French language course taught by a humorless martinet who instructs through ridicule. Sedaris and an international array of classmates struggle through each lesson, allowed only to speak in whatever minimal French they have managed to absorb. During a discussion of holidays, one Muslim student expresses puzzlement over the concept of Easter. The teacher turns it over to the class, and various efforts at explaining the crucifixion and resurrection are made:

"He call his self Jesus and then he be die one day on two…morsels of…lumber."

The rest of the class jumped in, offering bits of information that would have given the Pope an aneurysm.

"He die one day and then he go above my head to live with your father."

"He weared of himself the long hair and after he die, the first day he come back here for to say hello to the peoples."

"He make the good things, and on the Easter we be sad because somebody make him dead today."

The fish-out-of-water element of this portion of the book can sometimes approach overkill; after all, it’s a point-of-view Sedaris evokes even in his own living room. In fact, the best story in the second section, "Picka Pocketoni", turns the tables by pitting Sedaris against a tourist couple from the United States vacationing in his adopted homeland. Mistaking Sedaris for a French pickpocket, these Ugly Americans go on at length decrying the filthy foreigner, never realizing he can understand every word they say. But even when painting himself as a knowing insider, the author can’t resist turning the scalpel on himself; when the time comes to devastate the couple with a well-timed one-liner, Sedaris is for once at a loss for words.

While neither as laugh-out-loud funny as Barrel Fever, nor as cohesive and oddly moving as Naked, Me Talk Pretty One Day nevertheless proves a worthy showcase for one of the premier humorists of our time.