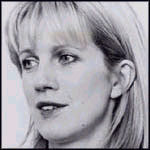 The Something Might Happen in the title of Julie Myerson&#146;s bleak, haunting not-quite-whodunit seems at first already to have happened: a woman named Lennie has been grotesquely murdered in a seaside village in Suffolk and the police have been called in.

Through the eyes of Lennie&#146;s best friend Tess, we learn about the murder&#146;s effect on the town and on Tess, Tess&#146;s marriage and her children. This book is not so much about this particular murder&#151;the crime is never solved and we soon stop caring whodunit&#151;as about the effectthat remorseless violence in a random universe has upon everyone, struggling to find meaning in the inexplicable and provide succor to the inconsolable.

Tess is a mother of four, a working osteopath and a wife struggling to remain close to her husband Mick while railing against the enforced domesticity that she finds stifling. Further complicating her life are her continuing friendship with Lennie&#146;s husband Alex, a former boyfriend, and her attraction to Ted Lacey, a young police-liaison officer who specializes in helping the families of crime victims. As the aftereffects of the murder relentlessly eat away at the town and its inhabitants, the "something might happen" to worry about is Tess&#146;s self-destruction.

Myerson&#146;s prose&#151;Tess&#146;s voice, in other words&#151;is spare, elegant, and as bleak as the landscape it describes. Only in its descriptions of the commonplaces of family domesticity does it warm up, and its insights into Tess&#146;s relationship with her infant daughter are superb:

Livvy&#146;s lying on her mat on the floor, gazing at the back of the sofa. I kick off my shoes, pull her onto my lap. Kiss her four times on the soft, wide moon of her forehead&#151;four fast kisses to make her laugh.

… I hold her away from me, hold her up under her sweet fat arms, and then zoom her back for another four kisses. Up and in, up and back. She does her cartoon giggle.

One aspect of the writing, however, creates a problem that distances the reader greatly from the other people in this story. She writes without using quotation marks, presenting even extended conversations as though they were diary entries:

A little of this goes a long way. It&#146;s more than a stylistic trick; it&#146;s a killer. It puts everything in Tess&#146;s voice, with the result that none of the other characters comes even remotely alive. The three men Tess is involved with&#151;her husband, Lennie&#146;s widower Alex, and the empathetic policeman Lacey&#151;are indistinguishable, and since she&#146;s apparently falling out of love with one of them while falling in love with another (and comes close to sleeping with all three) it’s a severe limitation for these characters to be undeveloped. Without some insight into the other principal players, Tess&#146;s grief-stricken ruminations become hermetic, self-referential, and ultimately boring.

When that ominous "something might happen" happens again, late in the book, it is unexpected, tragic, and utterly meaningless—one more random act in a ruthlessly cruel world. This time, however, it&#146;s not a murder but an accident, an accident to which Tess has possibly contributed by taking her eye off the ball "for that split second&#151;which is all it takes to lose just about everything you care about."

That’s how the book leaves Tess, grappling not only with grief but with the realization that sorrows do indeed come not single spies but in battalion. There is no consoling coda, no earnest, uplifting message about getting on with one&#146;s life, no practical resolve to keep it together for the sake of the children. Something Might Happen is a literate and elegiac rendering of the less elegant "shit happens," but the conclusion is equally bleak. The book ends as Tess contemplates the lonely marshes around her village: