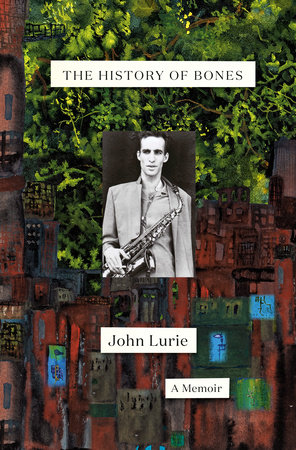 In the early 80s, John Lurie went from being an out of work musician living basement in New York’s Alphabet City to fronting the virtuosic jazz group The Lounge Lizards and the becoming an international film star of Jim Jarmusch’s arthouse hit films ‘Down By Law’ and ‘Stranger in Paradise.’  Lurie’s tales of drug fueled jazz tours, film festival glamour and one-night stands professionally and personally, provide fertile ground for a titillating book, but Lurie goes for much more than his in his wryly observed and engrossing memoir ‘The History of Bones.’

Now in his late 60s, Lurie is living a much different life, but is not resting on any laurel.  In the early 2000s, he had to stop performing from a debilitating long-term effect of Lyme disease that prevented him from playing the saxophone. He was still a sought-after film composer, and he stars in his own HBO series ‘Fishing With John’ and his currently ‘Painting With John.’

It is the mark of a fine memoirist who can make their growing up years as interesting as the achievements that brought fame. Lurie’s moving portraits of his father, who died when he was a teen and his mother whose strength carried the family through the toughest times. His devotion to his bother Even, who is gay, and was the Lizards expert arranger/pianist.

Lurie and his brother Evan, a stellar pianist, co-founded the Lizards in the late 70s. Underappreciated in the US, The Lounge Lizards, was a vanguard jazz band that played to sold-out audiences around the world throughout the 80s. When no American record company would pick up his groundbreaking recording of Voices of Chunk, already a sensation in Europe, Lurie Invested all his money in to produce it and he lost everything. The Lounge Lizards when through endless personnel changes, but Lurie kept everything musically on the same track,

Yet, at the height of his fame, Lurie did not have money, often paying his band-members top fees, which was often the case, when performance contracts were not honored.  Meanwhile Lurie was also becoming a sought-after film composer. He scored Stranger in Paradise, Mystery Train and was nominated for an Academy Award for ‘Get Shorty.’

Lurie is honest about his struggles with fame, never bitter, always professional, and went out of his way to support his fellow performers, artistically and personally.  He writes most sensitively about his relationships with women, short or long term.

His portrait of New York City in a pivotal time in the underground arts communities in New York City.  Lurie’s remembrances of in in a perilous time of at the height of the AIDS crisis tearing through the communities of the performing arts.

At one point becoming custodian of a tenement building, living in a basement boiler room, taking out garbage, mopping floor and practicing his sax. He spins a few urban legends including the tale of his musical instruments being stolen out of his apartment, and he was wandering around in a drug haze one night and a man in pushing a wheelbarrow full of junk gave him a saxophone.

Lurie let Jean-Michel Basquiat crash out on his couch and gave him a space to paint.  His account of their friendship and mutual admiration as artists has veracity and is honest enough to include the downside of their eventual celebrity. Lurie’s unblinking account of his own heavy drug use that included heroin and crack-cocaine was part of the scene and continued after his success. As drug compulsive that he could be, it didn’t ruin his career, and after many years and attempts to quit, he stopped using.

Lurie’s professional relationship with Jarmusch also had ups and downs. Although not gossipy about his prolific sex, party and drug years, and even though he settles some lingering profession scores about artists betraying each other for money or fame, he isn’t vindictive. Mostly he is candid and magnanimous in his remembrances of his friends, colleagues, lovers, and rivals.

All along, Lurie is brutally honest about his own insecurities and failures, letting any remaining bones in his closet fall out for all to see. Meanwhile, add to his list of credits that of a skilled memoirist and fine line prose painter.