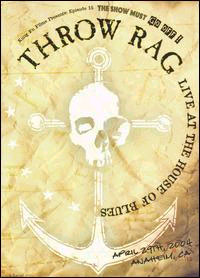 Back in the 1980s, Disneyland banned people with punk clothing or hairstyles. That&#146;s why it&#146;s so bizarre today to see fans with spiked hair slam-dancing at a venue on Disney property. This time, the cause of the commotion is Throw Rag, a Southern California outfit that combines strong doses of punk, psychobilly, country, and bluesy rock. The band mixes fury and reckless fun like no other. The music is fast and aggressive but very tightly played. Throw Rag&#146;s lead guitarist, Dino, displays as much skill as any musician in rock and Franco Fontana is a great bassist who often gets overlooked because of the manic performances by his band-mates at the front of the stage. The lead singer, Captain Sean Doe, bellows darkly witty songs about religious guilt, working-class life in the California desert, and alien abduction. The lyrics keep pace with the band&#146;s sound, creating jarring, fast-moving images, often of decay: &#147;a bad-liver weekend / glass eye winking / your lobotomy&#146;s been thinking.&#148; Live at the House of Blues captures all of Throw Rag&#146;s diverse elements. &#147;Hang up&#148; and &#147;Bag of glue&#148; are two powerful, visceral songs that helped the band win the punk portion of its fan base. They make an easy transition from their most entertaining country effort, &#147;(Only drink on) Days that end in &#145;y&#146;&#148; to an infectious new punk song, &#147;Swing-set Superman.&#148; &#147;Table 4 3&#148; draws Throw Rag&#146;s components together more closely. A song about infidelity and revenge, it combines an opening reminiscent of the Sex Pistols&#146; &#147;Pretty vacant&#148; with riffs drawn from rockabilly and surf music. The lyrics are country and Sean Doe spits them out bitterly while dancing like a hyperactive Sammy Davis Jr. Jacko, the washboard player, sings lead on a couple of tunes and his convulsive dancing and smart-assed interaction with the crowd keep the show unpredictable. He and Sean Doe both let the music carry them away to the point of exhaustion, and they employ a variety of weird dance moves in the process. When an instrumental segment comes up late in the set, and Sean Doe puts his microphone down and proceeds to stomp around stage yelling, you know there is nothing fake about the show&#146;s intensity. The DVD&#146;s producers at Kung Fu Records provide a front-row experience with eight cameras and lots of close-up shots. Likewise, the editor resists the urge to focus only on the two singers, and for the benefit of the under-age and the squeamish, the Captain and Jacko (narrowly) avoid the nudity that characterized some of the group&#146;s earlier performances. The film offers a memorable look at a unique band, but there&#146;s still the question that has baffled critics: what sort of music is this, anyway? The members of Throw Rag say that they&#146;re just a rock group, but the psychobilly label isn&#146;t far from the mark, since the band&#146;s shows capture the delirious spirit (if not the sound) of that style&#146;s founder, Hasil Adkins. At its core, however, Throw Rag is punk rock, creating a new form of chaos out of unlikely elements. –Chris Pepus
related posts