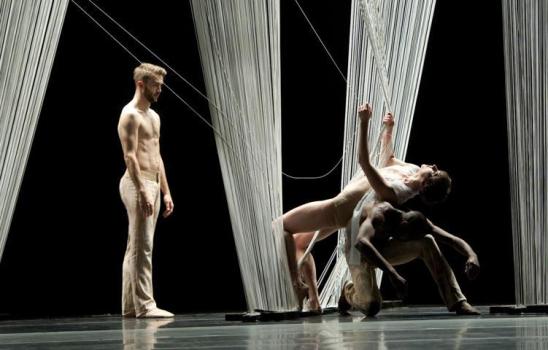 “A stone is frozen music.” —Pythagoras

The Lines Ballet’s world premiere of “Triangle of the Squinches” is a harmonic convergence of talent, a collaborative venture involving the creative kingpins of the Bay Area. Uniting Alonzo King’s celebrated choreography and sinuously talented dancers with musician/composer Mickey Hart’s (Grateful Dead) score and architect Christopher Haas’ (De Young Museum) set design, “Triangle of the Squinches” is a two-act participatory inquiry between dancers and art-installation-set with lofty ambition and cosmic overtones.

These supernova intentions come by way of astronomical data—in the form of celestial vibrations—gathered from the labs and research at the University of California Berkeley and, thanks to computer technology, turned into sounds humans can hear. To these cosmic radiations and good vibrations, Hart added a variety of world musical instruments, chanting Tibetan monks, and Scottish bagpipes to create 18 compositions for the 18 movements. The result is a lush, eclectic score with abrupt transitions that distinguish the different acts of “Triangle of the Squinches.”

In Act l a shimmering set is made from thousands of elastic cords hanging and producing a rectangular- shaped screen. These silvery white cables create an effect similar to rays of light beaming through water, evoking harp strings or jungle vines, beautifully catching Axel Morgenthaler’s (Cirque du Soleil) light design. Dancers get tangled and lost in it, or hang and rappel through, as if caught in a spider’s web. At other times the bands function as a backdrop for dance to happen in front of and, at other moments, it becomes something to open, reshape, and walk through.

The choreography is an assortment of seemingly random movement that stems from lyrical, to contact-improvisational-like, to yoga posture–inspired. At times it struggles to make sense of what exactly to do with this big toy on stage, or how to free itself from this self imposed weight—delightful as it is for periods of time. A similar challenge shows up in Act ll and takes its toll on the dancers’ timing and phrasing. Even though much of the choreography is syncopated—with a movement being repeated just a half a beat off from another—it lacks a unifying precision in the ensemble segments.

Dancers interact with the set in Act II of “Triangle of the Squinches.”

The set in Act ll is constructed from recycled cardboard and looks like a brown rubber doormat standing vertically, like a wall—with space between each of the Lego-like logs that build upon one another and that also fold into panels. It is a handsome piece of sculpture that inspired Robert Rosenwasser’s costume design to incorporate the same tone and texture as the set’s material.

Again, dancers climb, crawl, reach through, scale, pull apart, and rigorously push the set around, in many ways to the same effect as in Act l. It isn’t until the final movements, when the set is actually torn apart into two sections and the exploration of how to interact with it is liberated, that the choreography, score, and overall staging really take off. Now the set is an object left alone, balancing both stage and dancers, who are free to easily show their skill. In particular is the effortless ability and maturing talent of Michael Montgomery.

In general, the less-is-better principle works best for “Triangle of the Squinches,” bringing it down to earth and allowing for its simple beauty to settle like stardust.