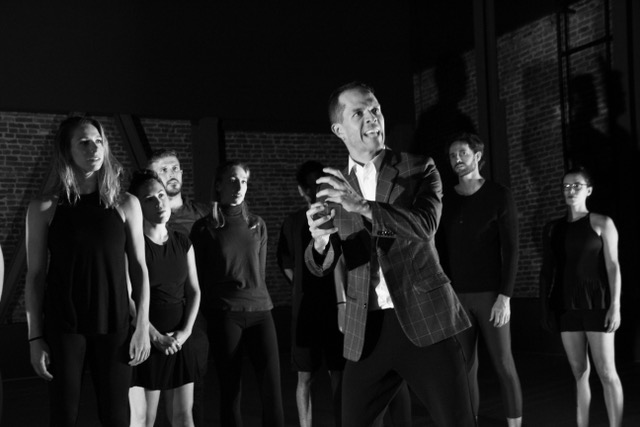 “Alpha Mouse” begins with a funeral formation of sorts with 13 dancers dressed in variations of black attire–men in black sport coats and ties, white shirts, women in black skirts and dresses—uniforms of the sexes. The procession walks in a fan-shaped configuration slowly, silently down stage. The bare stage is empty of music. The formation splits apart revealing four dancers, which splits apart leaving two men face to face. James Graham and Galen Rogers undress a foot apart, folding jackets and shirts into neat piles, eventually dropping their trousers. Beneath their black pants one would think would be their naked legs but instead they are wearing colorful harem pants—which they do a second time later, revealing yet another layer of clothing. They begin to gyrate together, melding into one intimate movement—a segment previewed in an earlier performance by Graham and Rogers in “Dance Lovers 6” (2017.) They undulate as if lovers yet their movements maintain physicality over sensuality. They dance as if testing boundaries rather than arousing desire–as Ean Golden’s scratchy soundscape fills in the space around them. When they shout out each other’s name it is again more like sonar moving through water than an endearment called to one’s lover. But, when one leaps laterally onto the other who is standing, the gesture becomes one of vulnerability. It is a tender cuddling action, as if the one holding and walking is protecting and looking after the one he carries.

Graham and Rogers not only carry each other in this early segment but also the bulk of the entire performance, both with their caliber exceeding that of the other, sometimes, self-conscious dancers and, with this duet coming off as the most polished and non-literal part of the hour-long dance. Graham’s choreography seems to be the strongest in duet form between two men and wanes the further out from that intimate vitality when incorporating more dancers—as was true with his commission by SFDanceworks, “Two Dimes and a Nickel” with the “Nickel”, clearly of lesser value, being the female dancer to the “Dimes” of the men.

Before long the funeral-like procession returns announcing the death of…”Masculinity.” Whew. Glad we got that out of the way. Now that masculinity has bitten the dust, hopefully the piece will move onto more gender-bending themes as is vogue in both dance and art presently and from the program notes the foundation of this dance performance and inquiry. Instead Rogers calls out different single words, different qualities associated with the feminine as two female, dancers Carolina Czechowska and Casey Lee, move frenetically and sometimes comically downstage. They even lust over Graham and Rogers exposed butts as they objectify men’s bodies. Before long Graham takes to a standing microphone asking the audience to close their eyes and to connect with themselves not saying that the set will be changed yet, of course it will be. Anticipation is naturally increased as one wonders what is about to be revealed. With eyes open we find a tall stand-up ladder with streamers attached to the back of Czechowska who now stands at the top of the ladder. She wears an antler crown appearing as the Divine Feminine–the company dancing randomly and indifferently below her. When she descends naked like Botticelli’s “Birth of Venus,” instead of stepping into a giant clam shell like the painting, she lands inside a galvanized wash bucket. This image comes off more a cliché than a revelation on the ambivalent and intricate aspects of the feminine, like the program notes suggests “Alpha Mouse” is attempting to investigate. “What is it to be a woman and have to balance so many modes of behavior expected of us? What is it to be frustrated or not adhere to this system of gender at all?” Noble questions that go unanswered and stimulate little interest from the choreography and staging.