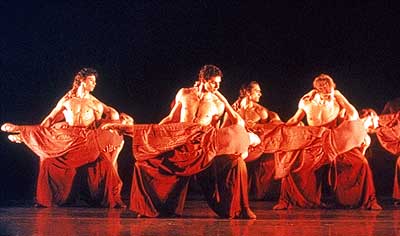 Artistic director Kevin McKenzie has wrought a renaissance in the 60-plus year old American Ballet Theatre which had lost some of its former luster following the Baryshnikov regime in the 80s. Exciting, good-looking young dancers and new works from some of the best choreographers working today are beefing up the traditional classic repertoire. Sure, there are still the white tutus and flowing lines of Giselle, the highly-touted second offering of the week, but those who attended opening night got a taste of something quite different.

Paul Taylor&#146;s &#147;Black Tuesday&#148; took its title from the day the stock market crashed in 1929 but after the terrible events of September 11, also a Tuesday, the name takes on an eerie double meaning. It is a work about the 30s, using vintage recordings of once-popular songs to frame Taylor&#146;s quirky choreography. Nevertheless, echoes of joblessness, homelessness and uncertainty resonate strongly in the present time–not to mention the state of the stock market.

But the wonderful thing about this dance is how the happy tunes and buoyant movement are played off against the underlying despair. A little like whistling in the dark. Or going to the ballet as debris is being cleared from the streets of New York City and troops are being shipped to the Persian Gulf.

It begins with a British music hall turn with Jerry Douglas and Eric Otto as a genial vaudeville duo living &#147;Underneath the Arches&#148; of a London bridge. A pair of pas de deux follow, the first with the amusing title of &#147;There&#146;s No Depression in Love,&#148; and the second a showcase for the lovely, leggy Erica Fischbach who, along with partner Brian Reeder, goes &#147;Slummin&#146; on Park Avenue.&#148; Michele Wiles is an exuberant &#150; and hugely pregnant &#150; abandoned sweetheart and pert Marian Butler goes hunting for the Big Bad Wolf (in order to keep him from the door).

But, amusing as these are, the heart of the piece lies elsewhere. &#147;Are You Making Any Money?&#148; with Sean Stewart as a cigar-chomping pimp, escorting a trio of his &#147;girls,&#148; serves as an introduction to Erica Cornejo&#146;s melodramatic solo &#147;The Boulevard of Broken Dreams.&#148; Things turn deadly serious as a band of thugs enter and Cornejo is passed from hand to rude hand before being rescued at the end. Joaquin De Luz is the hapless panhandler in the powerful finale, &#147;Brother Can You Spare a Dime,&#148; crooned by a very young Bing Crosby. De Luz transmits a heartbreaking dignity and, when you listen to the words of this song &#150; written some 70 years ago, it really makes you think. The more things change, the more they stay the same.

The curtain opens on 15 dancers, bright in Isaac Mizrachi&#146;s colorful costumes, sleeveless Nehru suits and one gold earring for the men and re-designed tutus for the women, plus gold belts for all. This splash of color is played against a vast monochrome screen, which begins in red and subtly runs through the spectrum over time. Morris plays circles against straight lines, stillness against movement, music against silence, light against shadow. Two pas de deux are danced without music. They seem to depict lovers who cannot quite break out of the formalism of their public life, in an echo of Balanchine&#146;s &#147;Bugaku.&#148; In one section, first one, then several dancers are mirrored by their own gigantic shadows, a play on Indonesian shadow puppetry. There is none of Morris&#146; trademark gender bending and only one dance that bears some of his usual humor. This is an elegant, formal piece–Morris at his most balletic–and it is a pleasure to behold.

The final ballet on this mixed program is &#147;Jabula,&#148; created by Natalie Weir for the Queensland Ballet. According to the program notes, &#147;Jabula&#148; is African for &#147;joy&#148; but there seemed to be precious little joy in this intense piece. Set to a syncopated choral and percussive score by Hans Zimmer, originally done for the film &#147;The Power of One,&#148; it reminded me of Alvin Ailey&#146;s &#147;Revelations&#148; without the fun. Acrobatic, yes but not a lot of fun. The best part was Sandra Brown&#146;s powerful solo near the beginning. The lighting was notable, creating an atmosphere ranging from unrelenting sun to vast cloudy night skies.

But here, as in &#147;Gong,&#148; the dancers of ABT demonstrated their strength in the art of ensemble. In both ballets there were few soloists and no stars. Or maybe they all were stars.