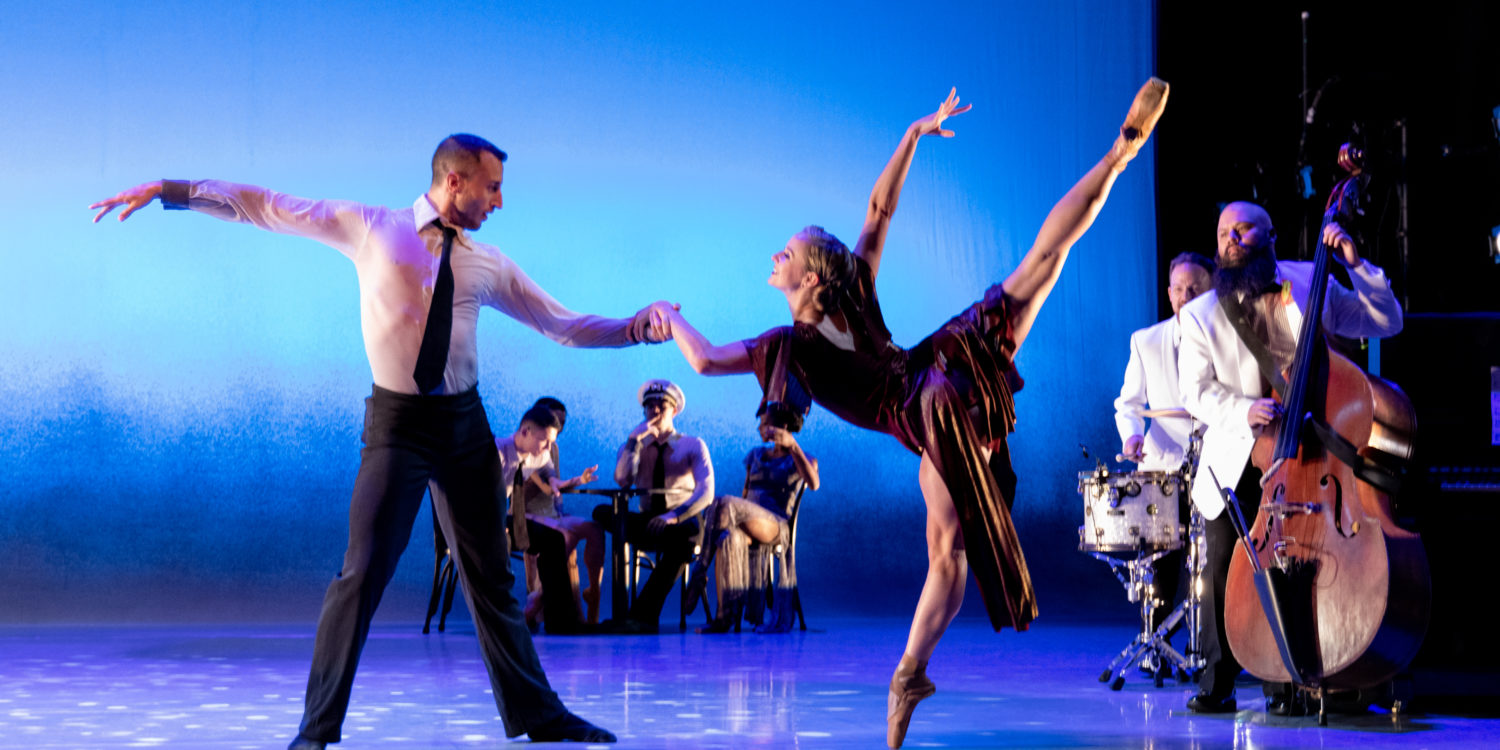 In July, BalletX kicked their return to in-person performances with a program of premieres in the open-air Mann Center in Fairmount Park, then the company was on tour to Sun Valley Festival in Idaho and Vail Dance Festival in Colorado performing BX repertory ballets. Last week they were back in Philadelphia at the Suzanne Roberts Theater for the first time back in an indoor venue for their revival of Matt Neenan’s dance-musical drama ‘Sunset, o639 Hours.’

‘Sunset’ is a drama based on the people and events of the maiden flight of the Samoan Clipper’s international airmail service to New Zealand, some 4000 miles, by Captain Edwin Musick and his crew in 1937 and their tragic return flight back.

At the center of the ballet is a long-distance love story between Musick and his wife back home in the US. But it is also about the adventures of the crew and the native islanders who they meet, their different journeys of adventures loves and loses, however fleeting.

The cast of 10 dancers is on stage before the lights go down, and in solo moments around the stage. Ashley Simpson piqueing meditatively en pointe, Zachary Kapeluck sliding into a time-step, other dancers supine on the floor. As the lights dim, lock into formation, embodying the craft’s gears and structure as it revs up for takeoff.

Once on the ground, they are ready for Neenan’s fantasia of dance flight- from haywire, 30s swing at a blowout NYE party at the ‘Sunset Club’ to a hungover band of brothers dance in skivvies, to islander dance bacchanalia. Neenan’s unfussy fusion of balletic duets, trios and solos, and intimate character scenes.

The Clipper flies to Auckland, New Zealand, with Blake Krapels playing the soused politician greeting them in a hilarious punch-drunk dance, timed to the pompous voiceover of the Prime Minister’s welcome.    Neenan streamlined the opening as the crew embodies the mechanics of the Clipper and later as it takes off and lands in Samoa and Hawaii.

The action moves to the ‘Sunset’ cabaret for the crew’s New Year’s Eve party. All of the dancers are on board and up to speed for the dance diversity, particularly impressive among the newer dancers who haven’t performed the company’s repertory live for the past 18 months.

Richard Villaverde and Skyler Lubin in athletic lift sequences that keep evolving.  Andie Yorita and Jonah Delgado taking the floor with flair and radiant chemistry. Shawn and Francesca in a smolderingly silky duet, Savannah Green and Blake Krapels in a lusty Lindy.

Everyone eventually fills the stage for some dance mayhem before everyone staggers away except for  Blake Krapels and Jonah Delgado continue slow dancing almost hidden in a quiet moment of acknowledgment.  The scene switches in the next beat and the men are island birds and are joined by the rest in a truly inspired avian choreography- a scene called ‘People, Birds and Planes’- is Neenan at his most warm, witty, and precise.

Neenan’s tender fantasy sequences between the Captain and his distant wife are danced with haunted tenderness by Zachary Kapeluck and Francesca Forcella.

Neenan co-created Sunset with New Zealand composer Rosie Langabeer, and the music is an equal player onstage, not a soundtrack or backdrop to the dancers. Several instruments were built to create specific sounds of rhythm and machinery of the period. Langabeer representing 30s swing music, jazz, ballade, and New Zealand folkloric and island social dance music.

The band members play various instruments the main ones being – Josh Machiz, (bass, percussion,) Isaac Stanford, (steel guitar, trumpet) Alexandra Day, (piano, vocals), Tara Middleton, (vocals, violin). The musicians weave in and out of all of the scenes playing various instruments including the invented ones built by set in the Sunset Lounge, harkens back to cabaret, all of the musicians playing multiple instruments, including the ones invented by Neil Feather for this ballet.

Christine Darch is a runway show of dance couture.  From flaring cutaway silks, lace, and leather for the cabaret dances to the crew uniforms that become sheer with sweat. All of the design work from the midair Clipper fragments by Maiko Matzushima to Drew Billiau’s sculptural lighting and cinematic sound designs by Nick Kourtides are all first class.