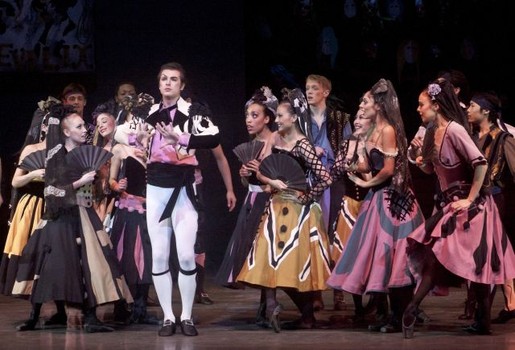 “In the Upper Room” (choreography by Twyla Tharp)

“Carmen” was first produced in London in 1949 and then premiered in San Jose on May 3, 2002. It is Luigi Bonino’s revival of Roland Petit’s one-act retelling of the opera as ballet. The “end of season” show May 11 featured company principal Ommi Pipit-Suksun as Carmen, soloist Rudy Candia as Don José and Nathan Chaney as Escamillo. Pipit-Suksun has real talent as an actress and technical performer; the others, despite valiant effort and stage presence, failed on both counts.

Part of the problem is the definition of the plot itself. Don José appears dressed in cape and an elegant outfit. The original opera has him as an ordinary soldier. When Escamillo finally appears, his role is just a walk-on. Pipit-Suksun and Candia accomplished the “love duet” with some bravado, though Candia’s ability was challenged. Pipit-Suksun did most of the work. The company of bandits and clowns were attractive and lively, particularly Ihosvany Rodriguez as “Le Chef Bandit.” Paul Polivnick led members of Symphony Silicon Valley in the reorchestrated Bizet music. Some favorites were omitted.

Ballet San Jose’s new Artistic Director José Manuel Carreño performed on the previous evenings of “Carmen” as Don José, with Alexsandra Meijer in the title role. Other news at Ballet San Jose includes the departure of controversial executive director Stephanie Ziesel and that this “Carmen” production (with Russian stars Natalia Osipova and Ivan Vasiliev in the leads), will tour to London, Moscow and Southern California in the summer of 2014.

“In the Upper Room,” Twyler Tharp’s 1992 “run around” to music by Philip Glass, provided a challenge in style for this young but well-trained company. Dressed in prison-striped outfits (some of which get shed to reveal bright red under-costumes), the company’s spirit was high, the technical virtuosity good. Tharp’s signature moves — running, falling, high jumps, quick lifts, fast exits, etc. — were wreathed in Jennifer Tipton’s smoky lighting. Dancers appeared and disappeared upstage. This reviewer had seen Tharp’s orginal company perform “In the Upper Room.” To my eyes, despite good efforts, only Lahna Vanderbush captured the Tharp style of easy arm swings, everyday walking and sneaker-clad indifference. The piece had been staged for the company by Tharp dancers Shelley Washington and Gil Boggs.

Ballet San Jose is to be congratulated on its refreshing programming. Let’s hope that Artistic Director José Manuel Carreño can take the company to full technical achievement.