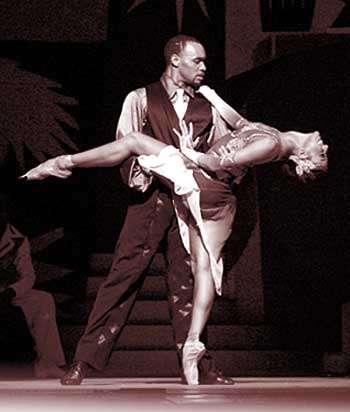 Arthur Mitchell’s Dance Theatre of Harlem used to fight a racist battle in which the very bodies of the mostly African-American company were grounds for dispute. Some critics famously came out with the decree that these sometimes less than spindly black dancers looked different and unacceptable in the classical repertoire, which Mitchell insisted on acquiring and presenting, all over the world. Having broken ground before, as the first African-American in Balanchine&#146;s New York City Ballet, where the Russian choreographer deliberately shocked audiences by casting Mitchell in leading roles, Mitchell and Dance Theatre of Harlem never stepped down, carving a place in history for themselves based on the very classicism they were criticized for dancing.

Ironically, in this year of Balanchine&#146;s birth centennial, the company appeared in San Francisco emphasizing something entirely different. Their Bay Area premiere was a big, Broadway-style production of a one-act work by Michael Smuin, St. Louis Woman: A Blues Ballet. This crowd-pleasing, entertaining work is based on a 1946 musical by Johnny Mercer, Harold Arlen, and the Harlem Renaissance writers Arna Bontemps and Countee Cullen. Proving that you don&#146;t need singers or actors to out-Broadway Broadway, the Dance Theatre of Harlem dancers looked absolutely joyful as they inhabited a gorgeously mounted world, all greens and pinks and purples, all nightlife, gambling and sex. The old argument about their ability to honor a Balanchine aesthetic is thankfully set aside in order that the cast of characters (the jockey, the good woman, the bad woman, the gambler, even Death) get to explode all over the stage in Smuin&#146;s brand of show biz ballet.

In hot-colored sets by Tony Walton and snazzy 40&#146;s-style outfits by Willa Kim, the piece takes place in the world of horse races and gambling. Most of the action takes place in the "Rocking Horse Club." The soundtrack includes a full (recorded) overture and familiar songs, including "Come Rain or Come Shine" from the original show. New dances and staging by Smuin, as well as musical additions and arrangements by Joseph E. Fields, manage skillfully to retell the story without actors, singers, or an orchestra, for that matter. It is to the credit of the acting abilities of the DTH dancers that the narrative comes across as clearly as it does, but Smuin is a master at this kind of thing and his chorus numbers are show stoppers.

Death comes in the form of a virtuosic male dancer, Ramon Thielen, who wears little black shorts and a party hat and gets to blast through the happy chorus numbers with his seductive pyrotechnics. Thielen is a sexy devil who gets all the best steps and serves as a narrative connector in this story of love and jealousy. The company dancers look as comfortable as Broadway pros with the responsibilities of characterization and stage business. The other flashy male role is that of a love-stricken jockey, Little Augie, played by former San Francisco Ballet dancer Ikolo Griffin. Light and technically perfect, it’s easy to see why the sultry Della Green, played by Caroline Rocher, would find him delightful. He doesn&#146;t just dance, he flies–his love is a pirouette that hardly seems to stop.

It is Rocher&#146;s interest in the boyish jockey over big guy, Biglow Brown, the dashing Donald Williams, which forms the conflict here. In the meantime, Brown&#146;s faithful lover, Lila, danced by Tai Jimenez, finds herself pouting on the sidelines once the sexy Rocher makes her way into the club. Biglow Brown can&#146;t help himself when it comes to women, apparently, and while William&#146;s committed dancing manages to shade the wheeler-dealer with a dimension of sympathy, Death keeps leaping into the picture as a reminder that bad boys finish last.

Before all this jazz and hoopla, there was actually a considerable amount of classical dancing on the program. The chosen Balanchine piece, Concerto Barocco, is always a pleasure to watch, although the company appears to be less obsessed or able, these days, with the kind of technical purity and classical rigor demanded by the genius Russian&#146;s masterpieces. Alicia Graf was confident and beautiful in the leading role, her extensions and musicality particularly effective in the slower second movement, where she was partnered by the calmly subservient Addul Manzano. In the ballet&#146;s ensemble movements, particularly in a lack of attack and organic unity, the company looked less stellar. Some dancers look born to speed, others not. The unfortunate truth of this Balanchine work (and many others) is that speed and clarity are what it&#146;s all about.

A taste of the artificially exotic was offered in Sir Frederic Ashton&#146;s 1971 Thais pas de deux. The British choreographer’s work with the Royal Ballet in London took on different emphases from that of his Russian rival in New York. Thais, performed by Melissa Morrissey and Duncan Cooper, is a romantic, bejeweled affair with overtones of Orientalia and familiar music ("Meditation" from the opera Thais) by Jules Massenet. Endless bourrees propel the dreamy goddess through space in a style that could lend itself to satire, especially with the choreography for veil. The dancers succeed, however, both through the regal carriage of Cooper, whose partnering duties seem to preclude ever letting his fluttering sprite touch down, and the delicacy with which the lovely Morrissey imbued her movements.