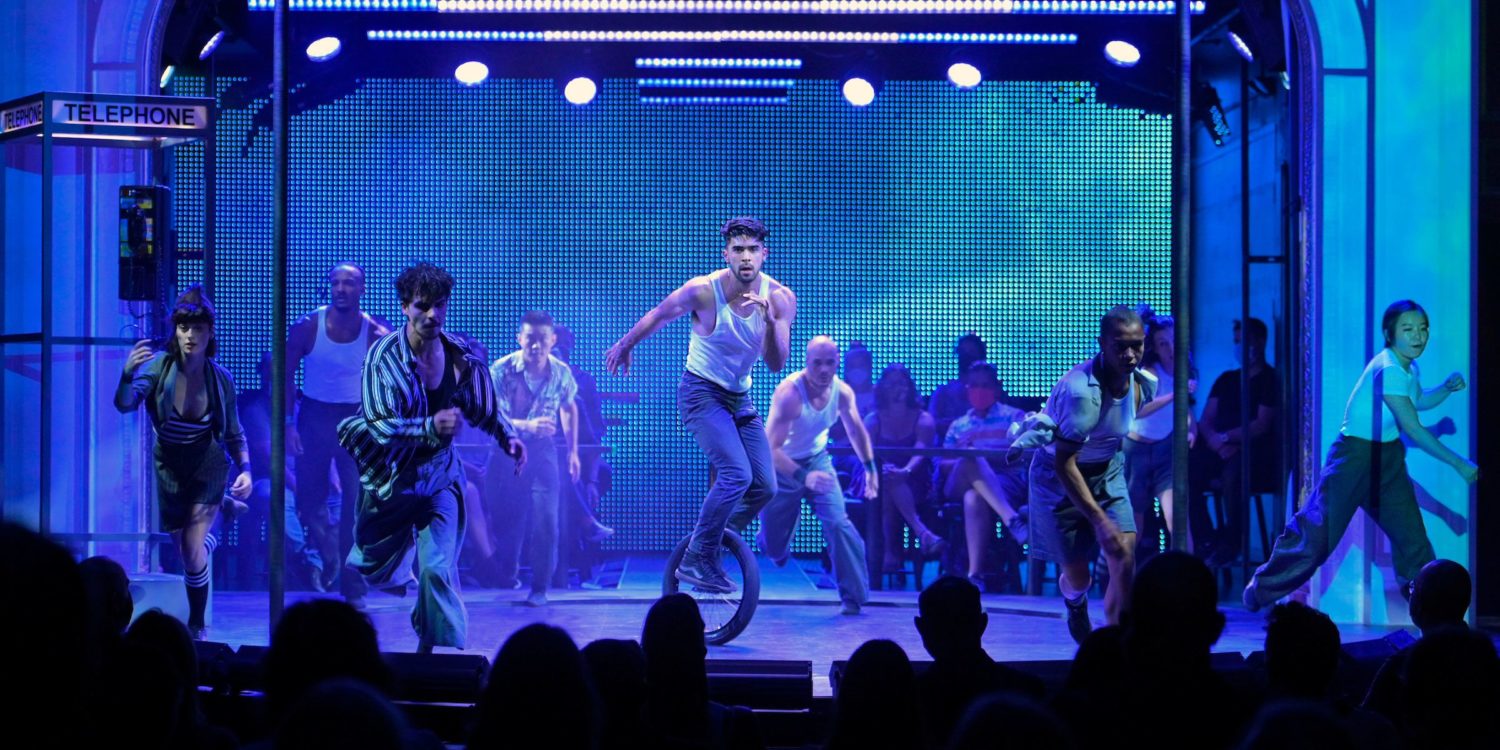 “All across the nation such a strange vibration, People in motion,

There’s a whole generation with a new explanation,

“If you’re going to San Francisco” or if you live “high on a hill…where little cable cars climb halfway to the stars” surrounded by fog and summer-chilling winds; if you’ve lived in the Bay Area your entire life or just arrived, if you’re young or old and been indoors for the past 18 months, worried about the pandemic and the collapse of Civilization then, “Dear San Francisco: A High-Flying Love Story” will remedy your foghorn blues. Put down your scotch and sourdough bread for this 90-minute, highly entertaining acrobatic performance reflecting a still gritty world but a world of wonder and awe, where it’s hard not to smile, gasp, clap, or drop your mask-covered jaw in amazement. You deserve to be inspired; you deserve to forget the realities clamping down around you. You deserve to return to the Club Fugazi in San Francisco’s North Beach where “Beach Blanket Babylon” entertained 6.5 million of us over 45 years–which was the longest-running musical revue known to humanity. Club Fugazi–home of the beatnik-cool poets–Alan Ginsberg, Jack Kerouac, Lawrence Ferlinghetti…, venue for the Grateful Dead’s first album release party (1967) and sound stage for the legendary Thelonious Monk recording his acclaimed solo album, “Thelonious Alone in San Francisco” (1959.)

This culturally rich and heritage thick past landmark adds a tangible dimension to the extraordinary feats performed by a nine-member world-class troupe composed of talent from China, Australia, Canada and throughout the US. Their rainbow diversity is also reminiscent of the many immigrants that once favored Club Fugazi as their social club of choice. This youthful troupe is explosive–street-smart rough and street-smart sexy, double-jointed talent, sexually ambiguous just like the city’s edgy Mission District. Surrounded by history, they are creating their own legacy, claiming the city for their generation–respectfully, playfully, and most impressive–authentically. They can walk across the proscenium upside down, play the guitar while being swirled and flung across the stage, juggle hats while standing on another’s wrist in the air, ride a unicycle through the audience on top of a bar counter, spin four Chinese Diabolo yoyos while tumbling, and slide upside down on floor-to-ceiling Chinese poles, stopping within inches of breaking their necks. What’s not to like? This cast has cojones!

Keep in mind that these “death-defying acrobatics with a life-affirming theatricality” are all happening within the very tight, relatively low ceiling space of the Club Fugazi and not a big tent. “Safety is an illusion,” wrote James Baldwin, as quoted by a performer, and indeed it is. But there are also tender moments, perhaps one of the sweetest is when the performers pay homage to the Beat Poets who once flourished in this space by quoting lines from their works–their words still ringing fresh and true.

“Dear San Francisco” is born from the love of its native children, co-founders and artistic directors Gypsy Snider and Shanna Carroll. Snider began her circus career at age four when her parents founded San Francisco’s legendary, “The Pickle Family Circus.” Decades later she won a Drama Desk Award and an Outer Critics Circle Award for her choreography in a revival of the Broadway musical “Pippin” (2013). While Carroll—daughter of beloved San Francisco columnist Jon Carroll—began a performing arts career as a trapeze artist with Snider’s “The Pickle Family Circus.”  This foundation propelled her on to a 20-year career in the air with Cirque du Soleil and eventually lead her to co-designing the first segment of the 2014 Sochi Winter Olympics Opening Ceremony. Both Snider and Carroll are also the co-founders of one of the world’s leading contemporary circus troupes, “7 Fingers.”

Yet, unlike Cirque du Soleil with its overproduced in-your-face productions and Hollywood soundtracks, “Dear San Francisco” feels homegrown, sincere, a solidly impressive production that has a lot to do with intimacy. It will be challenging for you not to feel befriended by the cast, especially within this theater-in-the-round venue and their generous personalities. San Franciscan Natasha Patterson is an impressive all-around performer, captivating in her beauty, capable musician, juggler, dancer, vocalist, a contortionist turned actor who effortlessly nails the part of a femme fatale in noir detective scene.

Colin Gagné’s score and Jake Rodriquez’s sound design fit smartly together without trying to impress with volume or grandeur. Particularly fun is a riff on The Doors, “Break On Through (To The Other Side).” Likewise, celebrated production designer Alexander V. Nichols creates a warm and colorful presence with 60s-styled graphics without being gimmicky. Opulent lighting floods the audience as well the stage, and grainy black and white archival video footage of Market Street and of the 1906 earthquake create a foggy foreboding atmosphere.

With aerobatics it’s all about timing, trust, and precision. There couldn’t be a better time for “Dear San Francisco: A High-Flying Love Story.”