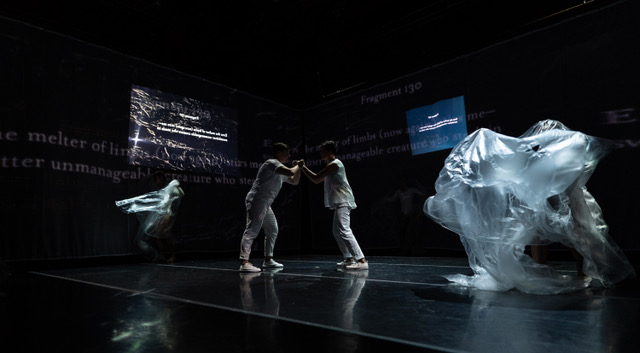 In a paleo restaurant in San Francisco’s Mission District a friend recounts his intense experience during an Ayahuasca ceremony over the weekend. (So… California!) During his plant-induced journey, a process that he went to with four of his closest female friends, everyone started to appear as ghosts, covered in shrouds of spider webs, like Sirens of Greek myth calling him to the other side. A short walk later we are at the ODC Theater for the world premiere of “extreme lyric I” by Hope Mohr Dance. There we are instantly transported into an otherworldly environment, a theater in the round, dimly lit by the starry blue light of projectors, and four moving female figures shrouded in plastic, veiled by four walls of scrims that caught like spider webs the Greek poetry being projected–fragments of Sappho lyrics—the first known female writer, 7th century BCE.

This sophisticated installation and contemporary aesthetic was museum quality, all elements smartly placed; a seductive mystery that instantly beckoned viewers into the unknown with their rustling shrouds being the only sound. The translucent covers were worn both as fashion and as swathe, binding dancers to this other place in time and space. As they reconfigure in this shadowy land, grainy graphic fragments of Sappho’s poetry lit the four sides of the scrims, both confusing and inspiring readers. The poetry in English and Greek came and went faster than could be digested adding to an air of mystery. There was no intention to make sense of these stanzas but to present them as something wild and untamed, intentionally unresolved, mysterious as the moon and all feminine. “In this work, we move around and through what we take to be (Sappho’s) feminist and queer forms of erotic independence and radical embodiment,” writes Maxe Crandall and Hope Mohr; who soon appeared outside the four walls of scrim looking in on the dancers, or moving alongside with them, while reciting the texts of Sappho as if a Greek chorus. Their chorus included their own text with that of Anne Carson’s translations.

Crandall and Mohr penetrate the veils and move in and out of the walled realm, talking in unison, questioning questions, reciting Sappho, echoing monologues, as dancers reassemble into different tableaus. In time the veiled walls crash down kabuki-style, and with it a good sense of the performance’s mystery. The dancers shed their plastic shrouds that had sometimes transformed into the wings of Greek sculpture or descended like fog over the coastal temples of Greece. In its place they dance ecstatically in nymph-like tribal intensity juxtaposed with sinewy leg extensions, and reverse lunges. wearing white leotards—as if a means to restrain their full sexuality and abandon. When Tina Turner’s, “What’s Love Got To Do With It” enters into Theodore J. H. Hulsker’s raw sound design, the magic is further impeded even though it is clear why this choice of lyric is positioned next to Sappho’s sometimes playful, sometimes anguished songs about her susceptibility to the graces of younger women–the poet who is credited with giving us the word, lesbian.

The choreography holds to the frenetic and unabashed movements of ecstasy and only alludes to the erotic component of that ecstasy in one or two moments, nearly mirroring the way Victorian scholars tried to explain away Sappho’s sexual predilections. Where are the movements that reveal the deeply personal expressions of homoerotic passion thinly veiled in her lyrics? Only once, with dancers lying on the floor do they take a snake-like hand down the midline of their breasts towards their genitalia as an act of self-pleasuring and only towards the end do they physically linger, tightly lunging over one another is their the suggestion of an act more sensual.

If “extreme lyric I” sustained the power of its opening imagery and staging, then it would be a masterful work. The piece is often alluring and seductive but also a performance that has to be pursued to find its broader poetry and to unravel its pithy meaning. “extreme lyric I” remains an inquiry worth making, even when it is fragmented. That disjointedness is not unlike the salvaged pieces of the records on Sappho’s verse, written down on papyrus much later alongside other text. Even with the missing portions of her exact words and verses her voice continues to be celebrate through modern times.