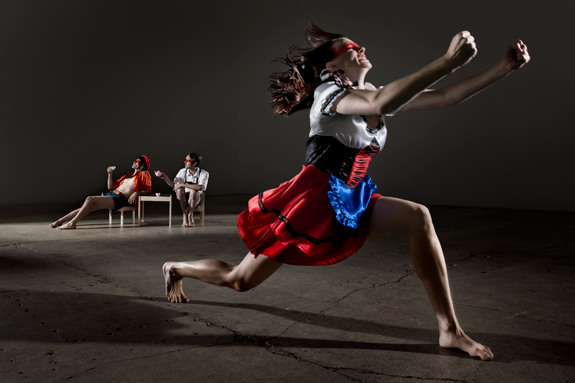 Putting It Back Together

Joe Goode is a consummate vaudevillian who delights in language, irony, wit, jokes and a sense of movement. His company, Joe Goode Performance Group, opened the current season with “When We Fall Apart” at Z Space. Joe is the star and center of the show; his monologues, as different characters, command the work.

It seems that Goode is fascinated by how “things fall apart” in people’s lives. So, he asked (or so he says) several friends to describe how. Wearing different wigs to impersonate these people, he tells their stories — and the dancers dance. Alas, the stories and Joe’s presentation are so intriguing and well done that the dances, various duets and group numbers by company members Felipe Barrueto-Cabello, Melecio Estrellal, Damara Vita Ganley, Jessica Swanson, Andrew Ward, Patricia West and Alexander Zendzian are less effective. The same lifts, falls and languid swing phrases prevail throughout. All move well, but the choreography seems lazy and repetitious except for one intense duet, by (I assume) Jessica Swanson and Felipe Barrueto-Cabello.

Probably the more exciting aspect of “When We Fall Apart” is the innovative set by Cass Calder Smith. Smith’s set design draws on the archetypal image of a suburban residential house and includes four components: a house, tree, lawn and table. Toward the end of the piece, the frame collapses on cue. Goode says about this work that it investigates this “myth” of stability and “how it constantly eludes us.” Yes, Joe, it’s true. It’s everyone’s story, and sometimes, except for your skills, there are no surprises.

Lizz Roman is passionate about her project: “We create a dance that reflects the function of its [Counterpulse’s] architectural setting — dancers unfold inside the kitchen, bathrooms, under the risers, down the halls and around the corners.” She directs the audience to follow the dancers into and through these various spaces.

It’s an adventure, one that most of the audience is willing to take, until it is no longer fascinating and becomes a challenge to accomplish.

The dancers (Chris Black, James Soria, Courtney Moreno, Tara Fagan and Cameron Growden) are well rehearsed in the acrobatic feats that allow them to roll from heights to depths, to lower themselves through doors and crawl in tight spaces. Although the piece lasts only 59 minutes (or so Roman says), the evening feels much longer, because the activity remains dynamically the same throughout.

I much admired Courtney Moreno’s opening sequence in the space above the bathroom doors and her descent through that space to the ground. She was joined later in that solo by James Soria, who was an equally skilled partner. For this reviewer, who has experienced years of “happenings,” events, site-specific aerial performances and other events that “explore space,” “Deeper Architectural Mediations” was intriguing but not exciting. For me, it needs more than ventures into available spaces to make a good performance. Mostly, it demands that those spaces be filled with exiting, dynamic movement. Although Roman’s dancers are fine, what she has given them to do is the endless repetition of today’s modern dance vocabulary: contact improvisation lifts, falls and rolls, and what is called “release technique.” It has its qualities, but finally, it goes nowhere rhythmically and becomes dull.

For new audiences Roman’s piece will be an innovative theater experience. Be prepared to bend the back and the knees.