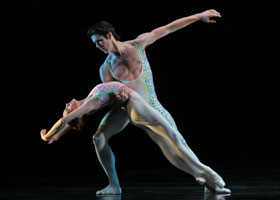 Houston Ballet launched its 37th season with ‘Simple Elegance,’ a trio of works that included two contemporary masters along with Stanton Welch’s world premiere, Brigade. The title speaks to the clarity of thought of each choreographer’s mission: one idea, elegantly explored in a satisfying dance.

Neo-classical giant, Glen Tetley, was on hand with his masterful tribute to John Cranko, Voluntaries. The Houston Ballet is the only American company to take part in a world wide celebration of Tetley’s 80th birthday. Tetley carved an outstanding path in the dance field that cut through boundaries between the modern and ballet worlds. His work fuses elements of both, and was powerfully danced by the ensemble. Poulenc’s Concerto in G minor for Organ, Strings, and Timpani, confidently played by the Houston Ballet Orchestra, galvanized attention throughout. Principal Sara Webb soared in ethereal confidence in Tetley’s intricate partnering with Connor Walsh. They captured the essence of the work, which was simultaneously sorrowful and triumphant. Completely surrendering to the reverence embedded in Tetley’s masterful choreography, Webb became the pivotal nucleus of this emotional performance. Up-and-coming soloist, Walsh, ushered her into the airspace with equal resolve. Walsh gains maturity with each new role he attacks.