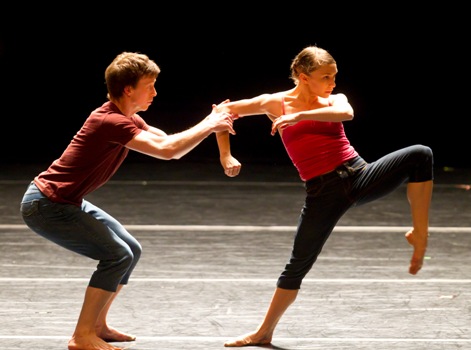 Similar to Naharin’s “Decadance,” “Three to Max” is a collage of past works created by the choreographer during the last decade; the piece combines excerpts of “Three,” “Seder” and “Max,” most recognizably.

A male soloist opened the show, dressed in jeans and a tank top, and accompanied by piano music. Sharp isolation in his pelvis, neck and foot added to the soloist’s clarity in movement; huge vertical shifts in body level and physical position occurred in quick succession, with minimal time spent in transition. A female soloist followed, adding subtle contrast in movement integrity by exactly repeating the male’s choreography.

Naharin’s interest in humanizing his dancers was first evident in an early duet that condensed the narrative of an entire romantic relationship into a segment of brief, but emotionally satisfying, choreography. The dancers’ limbs and torsos wove in and out of one another, creating a close physical orbit; moments of weight sharing and body manipulation were punctuated by moments of intimacy and playfulness. Stillness, complex gestures and occasional lifts intermingled to create constant visual surprise.

A later segment slowed the physical intensity of “Three to Max” while amplifying its social commentary. Naharin presented all of the female company members in a crab-like position, legs open and genitals directed toward the audience. Pelvic circles and moments of kneeling emphasized the women’s roles as objects of the male (and female) gaze; ballet barre movement vocabulary diffused the mounting sexual tension.

Perhaps the most memorable element of “Three to Max” was a section of set and re-set. Naharin challenged the dancers to repeat 10-step sequences in a factorial-like sequence, each movement cued by counting in a nonsense language; the booming refrain, “Uno. Uno, Duo. Uno, Duo, Tera…” acted as the voice of God, in a sense. Though the structure of the section was simple in nature, complex movement patterns and occasional breaks in rhythm demanded viewers’ attentions.

Naharin’s work closed with a section from “Three.” Three lines of dancers took turns addressing the audience; the dancers exposed the side flanks of their bodies, demonstrated yogic and balletic balances, and created their own virtuosic movement combinations in what read like a dance battle of sorts. It was unclear what the rules were regarding repetition of movement phrases, but it was obvious that the dancers were engaging with and physically challenging one another throughout the section.

Though the movement vocabulary in Eyal’s “Too Beaucoup” made evident her link to Naharin’s movement language (Gaga), her piece had a visual and kinesthetic appeal all its own.

“Too Beaucoup” featured the company clad in all-white—unitards, flour-like face makeup, powdery wigs and white contacts effectively dehumanized the dancers. Colorless overhead lights and fog, when combined with the dancers’ often machine-like movement patterns, gave the onstage atmosphere a factory-like feel. The musical accompaniment wove in and out of this aesthetic—moving from 1980s workout music like Vicious Pink’s “8:15 to Nowhere” to more romantic tunes like Leonard Cohen’s “Hey That’s No Way tp Say Goodbye,” and Cole Porter’s “It’s De-lovely,” best known from the 1934 musical “Anything Goes.”

Eyal’s choreography highlighted the dynamic range of the HSDC dancers; moments of pure ballet technique butted against popping and aerobic dance vocabulary with consistent technical execution. Repetition and unison in choreography throughout the piece shaped the company into a cohesive unit, only seldom punctuated by dancer solos. During one simple but memorable segment, the dancers, set in horizontal rows, performed unison choreography in diagonal formations; the unison movement then seamlessly transitioned into horizontal groups, and back again.

At times, dancers appeared to be stuck in the same movement, much like a glitch in a well-oiled machine. Marching, fist shaking and upward gestures of surrender suggested that the dancers were perhaps unhappy in their regimented, emotionless roles.

Eyal introduced Cohen’s music about halfway through the piece. The song, as recorded by Beck, MGMT and Devendra Banhart, added a bright overtone to the work, in addition to a sense of irony; what seemed like a fitting song for the opening credits of an independent romantic comedy drew attention to the absence of human emotion throughout the piece.

The same sense of irony was apparent with the musical introduction of “It’s De-lovely,” and it heightened the poignancy of “Too Beaucoup”’s final scene. At the evening’s close, a soloist danced alongside four couples in close—but sterile—embraces, as Oren Barzilay sang the words, “You can’t fight what you can’t see. You cannot hide what you fear.”

As evidenced by the immediate standing ovation at the end of the performance, Sunday’s audience members caught the HSDC bug—and they certainly weren’t hiding it.