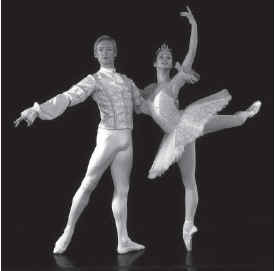 The Sleeping Beauty done right is like a huge orgy. The "Ballet-feerie" in three acts with a prologue and apotheosis is all about sets and costumes, a cast of thousands, the three and a half hour playing time, a bloated, gorgeous score by Tchaikovsky, and an opportunity for one ballerina to rise out of all this in dewy perfection as the 16-year-old princess, Aurora. Kirov Ballet, the St. Petersburg company where the ballet premiered in 1890, does things right. Currently touring a 1952 production because their 1999 re-do is too huge and elaborate to go on the road, they still travel with a 150-person orchestra and more dancers than one can imagine fitting on one stage at one time. Of course they all do, in the most spectacular manner.

Diana Vishneva, the Aurora on opening night, is one of the most talked-about ballerinas in the world right now, and while she slipped on stage at Zellerbach Hall and lost her composure just for a moment, there was the opportunity to witness a kind of supreme grace and gorgeous fluidity in her performance. While other ballerinas make themselves larger-than-life, shouting with their high extensions and aggressive pirouettes, even their little self-satisfied smiles during feats of balance, that they know that you know, Vishneva was something else. Beyond having a face that is more pretty girl-next-door than chiseled superhuman, she possesses a quality of subtle joy, a sense that dancing isn&#146;t hard, it isn&#146;t amazing, it&#146;s just something she loves.

Of course, Vishneva effortlessly floats through her Rose Adagio without a wobble, adds triple turns where doubles will do, and seems to fling her right leg up by her ear as if she were merely breathing. But what was most remarkable about her performance was the quality of innocence and ease she communicated. Her Aurora made one of the most difficult roles in the classical repertory seem like an acting part with a little dancing. She deserves every bit of adulation she has received, as well as her obsessive worship by balletomanes.

The rest of the production featured moments of fine dancing, especially in the Act 3 wedding scene, where storybook characters like Puss in Boots, Little Red Riding Hood, Cinderella and the Bluebird all come out for multiple variations to entertain the palace guests. Throughout, the Lilac Fairy, danced by the round-faced Uliana Lopatkina (there were multiple casts for the five performance engagement) projected the appropriate calmness and strength in the face of evil, suitably portrayed by Igor Petrov as the villain Carabosse. The Prince, who only shows up to rescue, conquer and love half-way through the ballet, was a handsome blond danseur, Igor Zelensky. He looked noble and had good elevation on his jumps and softness to the landings, but he lacked the edge of spectacularity that the Bluebird, Anton Korsakov, got to show off.

In showing the world the kind of excessive production values that George Balanchine came to America to strip away, it is possible in 2005 to appreciate the very sumptuousness of all the trappings but also to appreciate that there wasn&#146;t that much dancing. A ballet like The Sleeping Beauty is twenty-five ballerinas looking perfectly symmetrical in stillness, rows and semi-circles, rather than nine travelling through space in amazingly complicated precision. Technique for technique&#146;s sake has become the American way in ballet, but it is useful to recall the joys of splendor, and the way that an orgy of color, movement and sound can also yield a supreme moment or two of simplicity. Aurora, who sleeps for one hundred years before being awakened by a kiss, symbolizes old-fashioned hope in a modern, overcomplicated world.