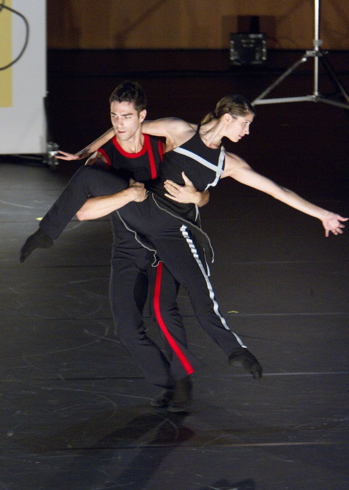 What does one make of a company that bills itself as “a curatorial collective”? Pretty fancy-sounding, but does it mean anything more than any other ambitious new company? Well, it starts with a choreographer/director (Benjamin Millepied). Then there is a composer (Nico Muhly). That is a little different. Also included are an art consultant (Matthieu Humery), video producer (Dimitri Chamblas), and a producer (Charles Fabius). Their stated mission is to “curate artist collaborations for the theatre stage as well as for specific sites and promote educational programs.” Lofty, right? But is that terribly different from a lot of other arts organizations? I do not think so.

On to the important stuff. What happens when you go to a performance of the L.A. Dance Project? First of all, the good news. The program featured six impeccably trained dancers with balletic form and modern sensibilities. So what am I holding back on? Let us get it out of the way. Collective member Muhly’s composition was quite interesting, but musically, the other two thirds of the program was dreadful.

Starting with the worst, the second piece, “Winterbranch,” was choreographed by Merce Cunningham in 1964. If you are of a certain age you may recall that as an era of breaking away from the artistic oppression of the 1950s and exploring the limits, not always to best effect. We are talking “Age of Aquarius,” man; let it all hang out. Cunningham asked Robert Rauschenberg to do the lighting so that it would be like being on a dark road with occasional headlights flashing past. Rauschenberg costumed the dancers entirely in black with black paint under their eyes. I can tell you this, frankly, from a careful reading of the program as almost none of it was at all visible to me or anyone else around me in the balcony. Friends who sat close up say the dancers performed beautifully. But not seeing anything is not the worst of it. There is composer La Monte Young’s “2 Sounds” as the musical accompaniment. He himself described it as “the sound of ashtrays scraped against a mirror” plus the sound of “pieces of wood rubbed against a Chinese gong.” I think that is altogether too kind. I would describe it as the sound of the 14th Street/Union Square subway station with two trains pulling in simultaneously … amplified. The first half of the piece was silence; during the second half I prayed for the silence to repeat itself. Cunningham himself dropped “Winterbranch” from his company’s repertoire in 1976. Maybe this “curatorial collective” should do likewise; it is time for some parts of the ’60s to be laid to rest.

The program opened with “Quintett,” choreographed by William Forsythe in 1993. The dancing was lovely, especially the fluid movements of Frances Chaiverini. She is a dancer not to be missed. The barren stage and flat lighting did nothing to compliment them, but at least one could see. The music is yet another story. Gavin Bryars “Jesus’ Blood Never Failed Me Yet” is compiled of 23 words repeated ad nauseam, and despite that, not actually comprehensible. On an insufferably hot Los Angeles afternoon, it was hypnotic in all the wrong ways. Too bad; the cast was entirely watchable.

A world premiere, choreographer Millepied’s own “Moving Parts,” finished the program once again showcasing the talents of the six dancers. Well staged, interestingly lit, and nicely accompanied by Nico Muhly’s music for organ, violin, and clarinet … time to sit back and simply enjoy. “Moving Parts” has been criticized for being “very very ordinary” choreography. But ordinary in the service of beautiful and watchable are not necessarily a bad thing. Must we suffer to call it art? It has also been criticized for being meaningless. Here I would beg to differ again. I believe that “Moving Parts” is abstraction in the best sense of the word. Dance is basically a graphic art, a living but visual composition. Three large, strong, Christopher Wool calligraphic panels, mounted on dollies, roll about the stage, pushed and pulled by the dancers. Strong spots are manipulated so that striking silhouettes of the dancers shoot up against the background and interact with the panels. The whole is uplifted by the rich sound of the Disney Hall organ, the violin and clarinet. After the first two it sounded like perfection.

If curating dance means subjecting audiences to the like of “Winterbranch” I think I will take a pass. However, if being a “curatorial collective” means more in the vein of “Moving Parts,” bring it on. Calling oneself a curatorial collective is a bit pretentious, but if what is really meant is dance that blends skilled dancing (first and foremost), interesting visual devices, and interesting new music, go for it L.A. Dance Project. There is plenty of space for you in Los Angeles.