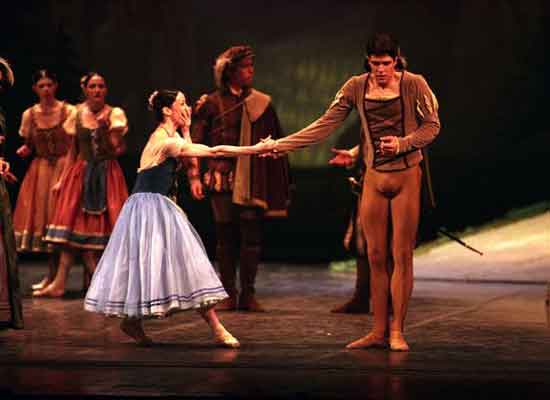 1967 performance by the National Ballet of Cuba, with Alicia Alonso:

Giselle is a deceptive ballet. Though visually it may resemble the earlier Les Sylphides&#151;lots of long, billowy white tutus and light airy movements&#151;Giselle delivers intriguing plot, characters worth caring about, heartbreak, death, evil nocturnal killers&#151;and, of course, love. Sometimes the choreography itself seems like fluff, all petit allegros and pretty arabesques. There are not many dramatic leaps or &#147;trick&#148; movements. Giselle&#146;s one virtuosic moment is in the First Act as she hops en pointe diagonally across the stage. That seems nothing compared to the fouette sequences audiences are used to in Swan Lake and The Nutcracker. But do not be fooled. The choreography is very demanding with beats, jumps and coupes put together at a dizzying rate. The La Scala ballet company gave a wonderful performance with a speed and, for the most part, precision that even Mr. B would have been proud of. Just to see the imposing red-fringed stage curtain of the newly renovated theater, to say nothing of the gaudy throned, box seat meant for the king, was an experience in itself.

Act I takes place during the grape harvest in the countryside where Giselle lives with her mother. Prince Albrecht, enraptured by Giselle&#146;s beauty, has concealed his identity and courted her under a peasant guise. A huntsman, Hilarion, also in love with Giselle, suspects and is jealous. Giselle and Albrecht flirt and dance until Giselle&#146;s mother makes Albrecht leave and takes Giselle inside the house to rest. The royal party arrives including Bathilda, Albrecht&#146;s betrothed. Giselle dances for her; struck by her beauty, Bethilda offers Giselle her necklace before departing. Suddenly, the tranquil mood is disrupted as Hilarion thrusts at Giselle Albrecht&#146;s cape and sword that were hidden near by. The royal party, alerted by the noise, returns and Albrecht kisses Bathilde&#146;s hand. Understanding all, Giselle goes mad.

The scene is a rite of passage for a ballerina. She has to let her hair down, literally, demonstrating that she can not only dance, but also act, and act well. This scene represents the climax of the First Act. Up until that point, it seems as if there was more miming than actual dancing. Gilda Gelati was convincing as the mad Giselle&#151; rewinding to the moments she and Albrecht had earlier on by plucking in mime a &#147;He loves me, He loves me not&#148; flower, laughing, crying, dancing alone the pas de deux they had danced together, then dragging Albrecht&#146;s sword preparing to commit suicide and finally collapsing into his arms, dead. Perhaps the orchestra, under the direction of David Coleman, could have turned up the schmaltz factor just one more notch.

Act II opens with the Willis, young virgins who have died before their wedding day. They convene to dance at night at their graves and any man who crosses their path is forced to dance to his death. These cruel women seem delicate and innocent, yet they lure men into their midst to kill them. Mirta, the queen and ringleader, enters first, bourreeing across the stage rapidly. She does not smile, but moves with precision and incredible grace. Sabina Galasso as Mirta had some trouble with the opening penche and her neck seemed a bit stiff overall. The crossing arabesque passage of the corps of Willis was impressive&#151;four rows of six ballerinas with long white tutus in arabesque, create a fan effect as they cross and recross the stage in little hops on the supporting leg.

Hilarion comes to mourn Giselle and is sentenced to death by the Willis. He dances until exhausted and the Willis throw him into the river. Albrecht, too, comes to Giselle&#146;s grave and, magically, she appears. They dance together, he always trying to touch her, and Giselle passing through his embraces like fog. Suddenly, the Willis encircle Albrecht and order him to dance. Giselle pleads for mercy and the most touching pas de deux ensues. Albrecht lifts Giselle slowly; she flies like a cloud and lands in extended arabesque lines. Giselle dances to save the life of the man who broke her heart and drove her mad. The Willis, however, remain unmoved and force Albrecht to dance. Just as he collapses, unable to go on, the first rays of sunlight appear and the Willis vanish. Albrecht, safe, remains alone at Giselle&#146;s grave.

Beyond the dancing, the beauty of the ballet lies in its characters and the significance of the plot. This is not the old story of girl meets boy, boy betrays girl, girl goes crazy and dies. Here, instead, girl becomes a supernatural spectral woman who lethally ensnares men. But when her true love arrives to mourn at her grave, Giselle does not bitterly avenge her death; still motivated by her passion she spares her assassin, cheating Mirta and the other Willis of their victim. Giselle&#146;s ability to save Albrecht despite his deceptiveness renders her tender, tragic, and above all human&#151;unlike the Willis, who have all suffered and died due to love but who remain unaffected by Giselle and Albrecht&#146;s plea. Dancing itself is deceptive in Giselle. Giselle loves to dance but suffers from a heart so weak that dancing could take her life. The ghostly Willis seduce through dance, and the men they encounter must dance until death. Thinking about all this, the &#147;light as air&#148; ballet gets a little squirmy. Does true love really triumph in the end? It may have spared Albrecht&#146;s life but not Giselle&#146;s or that of the other Willis for that matter. The curtain closes on Albrecht slouched by Giselle&#146;s grave, utterly alone.