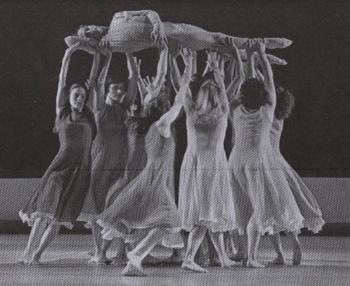 Many choreographers are adept at placing bodies in space but few besides the late George Balanchine have moved them to music as does Mark Morris. Particularly in his 1988 tour de force L&#146;Allegro, il Penseroso ed il Moderato there is a marriage of movement to music that feels positively organic.

And such unlikely music! This writer is no fan of the Baroque in general or Handel in particular but I could listen to Handel&#146;s settings of John Milton&#146;s verse all night &#150; if Philharmonia Baroque would keep playing it and the Mark Morris Dance Group would keep dancing it.

There is a verse in Milton&#146;s L&#146;Allegro that may have inspired Morris to craft this highly innovative dance: "Come, and trip it as you go, on the light fantastic toe." His dancers can trip the light fantastic with the best of them, as was amply proved in the opening of this week&#146;s engagement at Zellerbach Hall in Berkeley. Framed by a system of colorful sliding panels and screens that subtly change the configuration of the stage from scene to scene, they leap and twirl, somersault and crawl on all fours. They prance like horses and climb upon each other&#146;s backs, forming human pyramids that gracefully unravel again.

Sometimes the movement mirrors the words (which are not always audibly intelligible, in spite of the careful articulation of the singers). If the verse speaks of sight, the dancers cover their eyes. If someone sings of rivers and streams, dancers lie down and undulate like the waves. An ode to the lark and the nightingale has a soloist fluttering his arms like wings.

Other times, movement echoes the music. A dancer flutters her fingers in time to a soprano&#146;s trill and the entire company will prance across the stage in time to a measured figure. Midway, there is an astonishing fugue, in which couples come together, embrace and separate in such a way as to make the music almost become visible. Certain segments are staged on either side of a scrim, with the dancers seeming to be mirror images of themselves, until they break out of the pattern or meld so as to make the barrier appear to dissolve.

Morris seems never to run short of invention. Just when you think he surely has exhausted his vocabulary, he pulls another dazzling surprise out of his dance bag. "L&#146;Allegro" may be long (90 minutes) but it is never boring. There are enlivening bits of humor throughout, as much a Morris trademark as his espousal of androgyny (in this work, the women lift the men as readily as the other way around). A mating ritual of birds becomes a hilarious pas de deux. An antic hunting party with two timid foxes trying to hide from hounds run amok is a riot, in several senses of the term. An all-male game of war-and-peace, with slaps and blows alternating with kisses and hugs, had the audience laughing out loud.

But these are only words, inadequate to describe such a feast of sight and sound. Beginning with what can only be described as a flurry of dancers, criss-crossing the stage, the evening ends in an explosion of joy, again reflecting the closing verse: "These delights if thou canst give, Mirth, with thee we mean to live." It is obvious that Mark Morris has learned to live in the house of Mirth. But rather than only take delight there, he gives it back again – the great good fortune of those on the receiving end.