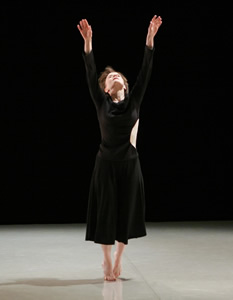 The human body can be markedly mundane or inconsequential in its expression, or it can tell us the truth about everything. I suppose that’s what keeps us interested in modern dance, despite its status as a form that few are patient enough to follow. Beth Soll presented her new work, Lament/Kvetch…and Romp!,  at the Cunningham Studio Theater on April 18 and 19, 20009.  Soll emerged as a “new dance” choreographer in  the 1970’s-80’s, for many years basing her company in Boston. The depth and integrity of her work, coupled with the exquisite subtlety of her own dancing, earned her a quiet national acclaim. Soll has been a tremendously prolific and steadfast artist. Her vision emanated partially from the work of German Expressionists such as Harald Kreutzberg, and her studies at the Folkwangschule in Essen. Now in her 60’s, she continues to make new work and perform with luminous rigor.

For Lament/Kvetch…and Romp!, she bracketed performances of two works from a recent previous season with new episodes. The evening started with a long section in which the dancers broke the fourth theatrical wall repeatedly by talking, complaining, commenting on what they were about to do, singing songs, and harassing each other. This was only intermittently successful for me. At times I admired Soll’s lack of fear of …well, anything, and her commitment to saying what she wanted. The choreography and performance of her solo during the opening section seemed generated from an authentic comic impulse. Other of the interactions on stage seemed way too hackneyed or cartoon-like to reflect an incisive humorous commentary.

These quibbles, however, were dwarfed by the enormous beauty that unfolded in the material that followed, repeat performances of last year’s Red Reverence and Mode.  Red Reverence was another of Soll’s extraordinary solos in which the air around her seemed to reflect every slight ripple of her vibrational energy. She strode across the space as if moving through fields of water. Her limbs moved with precision and clarity, emblematic gestures etched in glass. She stood still and just saw, her focus channeling distances so apocalyptic or visionary that we trembled as they appeared within the lens of this beautiful dance.

This was followed by the devastating Mode, a dance for three young women clothed in unfashionably modest white dance pyjamas. How does an artist today take three dancers, arm them each with a square of white chiffon, and make a piece that is so hauntingly huge in scope? This dance at its most poignant was extremely simple in structure, and yet metaphorically highly complex. Fiona Brown, Tamara Saari, and  Danita Shaheen formed and reformed various tableaux, sculptural moments, stark but profoundly evocative images with the white cloths. One repeatedly threw her fabric over her head and shoulders and arched back into ecstasy, surrendering to the overwhelming sensuality of the weight of a scarf in motion. A reclining figure was covered and recovered with cloth by the others; the dancers hid and exposed themselves with the fabric during a short processional interlude. The weight of the bodies as they leaned on each other conjured mourning, tenderness, sickness, regret, pleasure, catastrophe, slumber. Athletic jumping, shimmying, and pseudo-sexy high kicks were interspersed with passages of gravity and silence. The three held their cloths over their faces in different ways as they stood in a still grouping. References emerged to the expectancy and burden of being a bride, the shy resolve of a veiled woman, the yoke of women’s shared destinies, the finality of a shroud, the entrapment and release of a soul.

I could imagine any of these images being laughably sentimental if rendered by less sure hands. Soll has a command that makes her manipulation of this material masterful. The innocent-seeming squares of cloth became conspirators, instigators of revelation, artifacts of the entirety of the material world. Soll’s arrival at huge epic content through a modern dance scarf piece was instructive: no topic is too lofty or tawdry, no metaphorical device an innately unworthy vehicle, if approached with such depth of intent.

As Mode progressed, the stage space was invaded or shared by Soll, accompanied by Kim Ahlquist and Levi Morger.  The three held a quiet picnic on one side of the space while the other dance continued. Morger rose, and was overcome by something extreme, softly crumbling to the floor, echoing the falling scarves across the stage in the world of the other dance. Although all within the pretence of theater, it rang true.  Real life accompanied artful life, witnessing, reiterating.