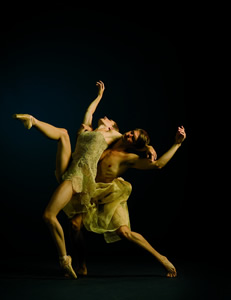 Alonzo King’s Lines Ballet is like America, all about the glorification of the individual. Currently celebrating 25 years of existence, the company features nine dancers (plus a guest artist) who look about as homogeneous as a waiting line of folks at the DMV. The dancing is that way too, a momentum-based quirky style that seems custom-fit to each dancer’s most extreme characteristics.

That being said, watching an evening of King’s choreography can overwhelm. All the frenetic momentum begins to dull the senses after awhile. In “Irregular Pearl” as well as “Rasa”, both world premieres, the music (baroque in the case of the former, Indian-fusion in the second) gives structure to the movement, but what amazes, over and over again, is the capacity for the Lines dancers to offer full-on, all-out, go-fo-it dancing. The reality is almost exhausting to observe.

“Irregular Pearl”, with a classical score played by members of the Philharmonia Baroque Orchestra, seemed almost orderly, thanks to the fifteen distinct movements of the piece. There were sections featuring new compositions by Roy Whelden, but mostly music by the likes of Handel, Vivaldi, Corelli and Scarlatti. The dancers, Brett Conway, Corey Scott-Gilbert, Ashley Jackson, Laurel Keen, Muriel Maffre (guest artist), Caroline Rocher, John Michael Schert, Meredith Webster, Keelan Whitmore and Ricardo Zayas, appeared mostly in duets and solos. A big group piece is really not a big group piece in King’s oeuvre, although the occasional moments of all-company dancing manage to stun because it is such a rarity, and because it seems almost impossible to pull-off based on the space each performer is constantly hogging. How do they keep from running into each other? Costumes, by Colleen Quen and lighting, by Alain Lortie, both added a chic visual point of view and always darkness rather than light to the work.

“Rasa”, with an original score by Zakir Hussain (performed by Hussain and Kala Ramnath) was, by nature of the wandering style of Indian-based music, more free-form and seemingly messy. In previous collaborations, Hussain has built a climactic musical finish that seemed nearly the perfect summation of King’s momentous movement. Here, however, things never seemed to rise in the same continual surge—it was more a give and take. Still, within some typically shaken-fluid sections featuring the same cast of nine plus guest artist Maffre (recently retired from the SF Ballet, and not quite wild enough to really lose herself in King’s language) were sections of sublime dancing. The men, in particular Brett Conway and John Michael Schert, seem to best discover the ability to be self-involved, detailed and wildly beautiful, all at the same time. Ashley Jackson and Laurel Keen also inhabit the movement with the kind of depth of understanding the choreography deserves. Ricardo Zayas is a strong newcomer.