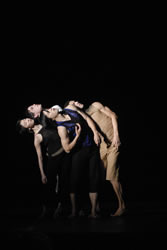 The Lyon Opera Ballet made it convenient for West Coast audiences to sample the works of three of the most prominent choreographers in Europe today, all of them women. Appearing on a Cal Performances engagement at Zellerbach Hall, in Berkeley, the “ballet” presented by the Lyon company was actually modern dance, with “Die Grosse Fugue” by Anne Teresa de Keersmaeker, “Fantasie” by Sasha Waltz, and “Groosland” by Maguy Marin.

Actually, “Grossland,” set to two of Bach’s Brandenburg Concertos, contained classical ballet steps. The fact that the dancers were dressed as Pillsbury doughboys and girls (or Michellin men and women, depending on your cultural outlook), wheeled on, propped-up like Nutcracker wind-up dolls, (and later stripped naked to bounce around in all their undisguised corpulence) was a a fact of no little irony. For all their alleged obsession with thinness, the dancers took great delight in flouncing around in their fat suits. If only the dance itself were more inventive, something remarkable might have been constructed. As it was, the dancers were reminiscent of the happy hippos in Disney’s “Fantasia”, no comment was made on fatness or thinness, and the piece had a self-satisfied, crowd-pleasing blandness to it that made the wasting of possibilities the most offensive aspect of it.

The other two pieces, also featuring classical music, both shared a kind-of stripped-down, shadowy somber quality. Both also featured the men of the company. De Keersmaeker’s “Die Grosse Fugue,” to the eponymous Beethoven string quartet (Opus 133) was a dance for eight men (here danced by 7 men and 1 woman) in black suits and clunky shoes. With deliberate gracelessness, they whip around, run, fall down and get up, over and over again. There was a certain rawness that the choreographer seemed to be going for with everyone getting sweaty, removing their coats and then their shirts, but Beethoven’s music was perhaps best illustrated in the transitional passages, when the dancers stood upstage as if taking a break, gasping for air, and the cascade of gorgeous music came forward without all the guy energy and BO.

Sasha Waltz, whose own company appeared in Berkeley in works that were much more experimental and theatre-based several years ago, choreographed “Fantasie” on the dancers of the Lyonnaise company in February, 2006 using Franz Schubert’s “Fantasie in F minor for Piano Four Hands”. The opening image, in silence, is a slow-motion imitation of violence, sword tricks, a suggestion rather than a literal pronunciation of theme before variation. A woman skitters on backwards, entering the dimly-lit playing space to be partnered in a droopy, rag-doll release technique. A second section contains running to music, which while reminiscent of Mark Morris’ “L’Allegro” has none its joyfulness. Waltz is beholden to music here, a relief for audience members tired of the European trend away from “danciness”, but the mood is still somber, her world one of blacks and grays.