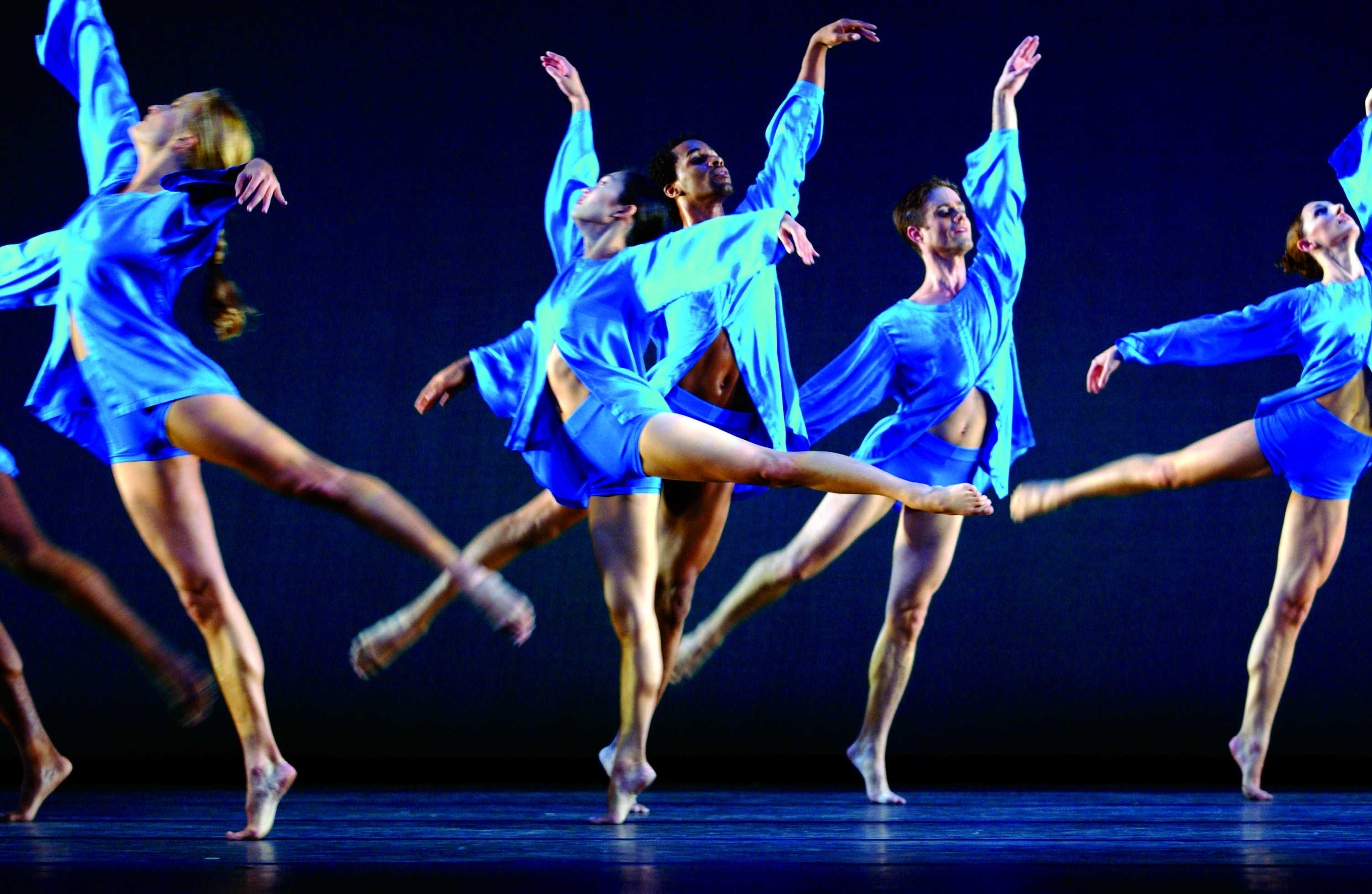 When it comes to dance, are you smarter than a fifth grader?  If you attended the Mark Morris Dance Group’s performance at the Krannert Center for the Performing Arts, you did not necessarily have to be.

The company’s Saturday night program consisted of three shorter works, each with a relatively simple structural composition.  The first piece, Visitation, presented a “one versus the group” mentality in both choreographic content and costuming as a soloist clad in grey struggled to assimilate the choreography of the other four ensemble members, dressed in shades of forest green. The ensemble often split for simultaneous duet work and rejected the soloist’s advances to join.  The second movement of the piece began with an adagio section that breathed emotional teenage angst – the soloist watched forlornly as new ensemble dancers performed solo choreography, only to later perform the same choreography herself in isolation.  Group choreography from the first section was repeated in the second; a circle of overlapping, interwoven duets excluded the soloist once again, painfully driving home the theme of the piece.

Empire Garden, the second dance on the program, invited audience members to channel their inner children in many ways.  Playful upper body movements like the shimmy, the cabbage patch and the monkey referenced popular vernacular dance as they adorned more traditional modern dance vocabulary in the dancers’ lower bodies.  The dancers’ colorful bellhop-like costumes and the dance’s mimetic moments of plot progression created a narrative that involved an enchanted toyshop of sorts.  Throughout the piece, select dancers were lifted on the shoulders or stood on the backs of their colleagues and silently barked directions to the group.  These moments created colorful stills onstage that seemed to reference children’s picture books; they also effectively drew attention to the faces of the dancers.  Open mouths and stretched foreheads made some of the dancers resemble gargoyles in their strong, silent crouches.

V, the final piece of the evening, played to the mathematically-inclined in its repetitive patterns of choreography and its geometric spatial patterns.  Dancers in opposite V-shaped formations performed similar choreography with differing musical timing first separately, then juxtaposed against one another.  Spatial patterns were complimentary between the two groups and created a mirror-like symmetry when the choreography occurred in the same space and time.  The last section of the piece, an Allegro movement, introduced small jumps, high kicks and soaring leaps, thus ending the evening on a high note.

Though the internal structures of the evening’s works were elementary, the choreography and its execution were anything but. Morris’s company members exuded virtuosity with every step; from effortless spirals in and out of the floor to turn series that stopped on a dime, the dancers’ immense technical training was apparent throughout the evening’s performance.  It certainly didn’t take a fifth grade education to recognize that the standing ovation the Mark Morris Dance Group received at the end of the night was well-deserved.