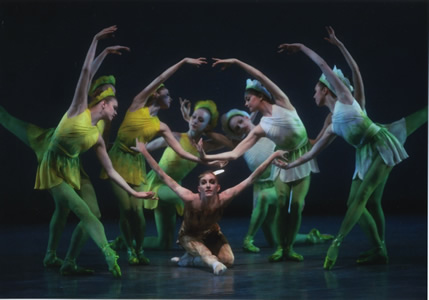 NYCB feels like it’s in the throes of a Thelma and Louise stage, cognizant of the fact that some radical change is imminent, and making a pact to exit guns ablazing. An overstatement, perhaps. But the season’s big premiere was Peter Martins’ new Romeo + Juliet, inspiring him (or inspired by) wishing to see actual teenagers play teenagers. At face value, the idea worked, as the talent is deep enough to support the demands on the company. But what of all the young principals and soloists, who had to step aside for these kids, who were supported by a big new marketing campaign and video-laden website? And the youngsters’ unfettered performances merely served to underscore an indifference that suffuses much of the company’s upper echelons.

No one’s presence raises questions about the rank system like Darci Kistler’s. Her presence past her prime may or not be linked to the fact that she is married to Martins. After all, she is someone who, in her fledgling teen years with the company, would’ve been cast as Juliet, all things being equal. Yet her occasional appearances were harsh reminders that age takes its toll (although the now-retired Kyra Nichols’ elegant final season performances showed this can affect individuals very differently). Kistler appeared as Lady Capulet in the new production (on the arm of Jock Soto), which felt more appropriate given her diminishing physical skills. Between Kistler and the kids sit a talented group of women who perform every now and again, sometimes finding terrific roles (Jenifer Ringer in The Dybbuk), sometimes just disappearing.

Back to the kids… Juliets included Kathryn Morgan, a small, smoldering presence who danced with the athletic Seth Orza. Tiler Peck is one of the company’s most technically impressive and energetic dancers; her gregariousness was balanced by Sean Suozzi’s fervor. Sterling Hyltin and Robert Fairchild made for a lovely, lyrical pair.

Otherwise, the men continue to exist in a kind of ether, with just a couple of principals (Damian Woetzel and Joaquin de Luz) exuding any kind of star power, although of course that’s not truly a man’s place in this world of ballerinas. Some of the allegro dancers, like Daniel Ulbricht and Antonio Carmena, stand out by virtue of the material that they are privvy to dance. And the Angle brothers showed their clean technique and lurking bravado.

Tyler Angle was featured in Chris Wheeldon’s premiere of The Nightingale and the Rose, a late-season highlight. The dance showed Wheeldon’s knack for fashioning fresh shapes and movement phrases from simple building blocks. With Wendy Whelan, Wheeldon always seems to find dabs of genius that add up to a brilliant total picture. Whelan’s darting head and flickering gestures truly evoked a small bird. A group of men in brown formed branches, and then by reversing sleeves to red, blood flowing into the plant to create a rose. Projections of the moon shedding a tear were used sparingly to underscore the surreal tone. City Ballet fortunately has a good number of dances by Wheeldon, as he is leaving his post as resident choreographer at NYCB to begin his own company.

Despite Wheeldon’s impending departure and the questionable morale, one wonderful program encapsulated the best the company has to offer. The Sunday matinee on a holiday weekend, it featured Balanchine’s Mozartiana, Tschaikovsky Piano Concerto No. 2, and Jerome Robbins’ Piano Pieces. Performing the lead in Mozartiana, Kyra Nichols – the last of the Balanchine era dancers – showed the subtle refinement of the previous generation. In Piano Pieces, Jennie Somogyi and Jenifer Ringer exemplified the current crop of principals. And in Tschaikovsky Piano Concerto, Ashley Bouder demonstrated the strong athleticism of the youngest leads, although there is the sense that she struggles to soften her extremely precise and fast movements.